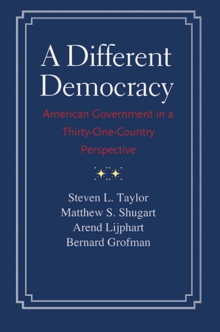 A DIFFERENT DEMOCRACY: AMERICAN GOVERNMENT IN A 31-COUNTRY PERSPECTIVE

Product Description American democracy differs greatly from other democracies around the world. But is the American way more or less efficacious than comparable democracies in Asia, Latin America, or Europe? What if the United States had a prime minister instead of (or in addition to) a president, or if it had three or more parties in Congress instead of two? Would there be more partisan animosity and legislative gridlock or less? These are the kinds of questions that thinking about U.S. government in comparative perspective helps us to analyze. Â  This valuable contribution to political studies takes a unique approach to a much-studied subject, looking at the U.S. government from a comparative point of view. Four distinguished scholars in the field examine the Constitution, the two-party system, the division of power between state and federal governments, and other major features of the American political system in terms of how they differ from other democracies, and they explore what those differences ultimately mean for democratic performance. By merging two important fields of study, American government and comparative political systems, this essential text offers a new and refreshingly insightful view of American exceptionalism. Review "This unique book successfully blends two major but traditionally separate political science subfields, American government and comparative politics, by systematically analyzing American democratic institutions and comparing them with those of thirty other democracies.Â This topical and engaging book is highly recommended for university and public libraries as well as collections specializing in US studies and comparative politics." â€”Choice "The scholarship here is impressive.Â This book is surely unique in the depth of its comparative description of theÂ United StatesÂ and the systematic nature of the comparative analysis."â€”G. Bingham Powell Jr., author ofÂ  Elections as Instruments of Democracy " A Different Democracy overcomes the traditional segmentation of political science into American and comparative politics, choosing a sensible analytical focus instead: democratic political institutions. The book will be the premier introduction to this subject for undergraduate and graduate students for years to come." â€”Herbert Kitschelt, Duke University, author of The Transformation of European Social Democracy About the Author Steven L. Taylor is professor and chair of political science, Troy University. Matthew S. Shugart is professor of political science, University of California, Davis. Arend Lijphart is research professor emeritus of political science, University of California, San Diego. Bernard Grofman is professor of political science, University of California, Irvine.