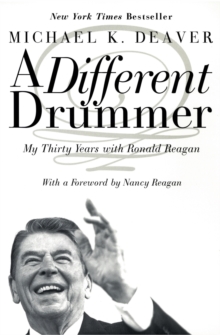 A DIFFERENT DRUMMER: MY THIRTY YEARS WITH RONALD REAGAN

A warm, intimate portrait of President Ronald Reagan by his confidant and friend of over 35 years.

Former aide and long-time family friend Michael Deaver first met Ronald Reagan during his 1966 campaign for governor of California and later served him in Sacramento and Washington, DC, as the president's deputy chief of staff. In A Different Drummer, Reagan emerges as charismatic and unwaveringly optimistic, a devoted husband and dedicated leader, disciplined and tough. As Deaver points out in his introduction, 'worked eight years doing the toughest job on earth; criss-crossed the world; and survived an assassin's bullet, a devastating riding accident, cancer, and brain surgery all after he turned seventy.'

Deaver also shares the lows, including the tough times that would test the strength of their friendship. Finally, he shares a look at Reagan today as he battles Alzheimer's disease. It is Nancy Reagan's finest hour, Deaver writes, a validation of the greatest love story he has ever known.