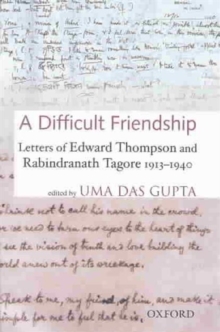 A DIFFICULT FRIENDSHIP: LETTERS OF EDWARD THOMPSON AND RABINDRANATH TAGORE 1913-1940

Edward Thompson, an English poet and Wesleyan missionary--and, later, father of the eminent historian E. P. Thompson--first met Rabindranath Tagore on the day the poet learned he had won the Nobel Prize in 1913. He became closely involved with him and his circle during the preparation of Rabindranath Tagore: Poet and Dramatist (OUP 1992), the first major English-language study of his writings. This volume of letters, ranging from 1913 until 1940, the year before Tagore's death, sheds new light on this remarkable and stormy friendship, and offers fresh insights into Anglo-Indian relations in the first quarter of the last century.