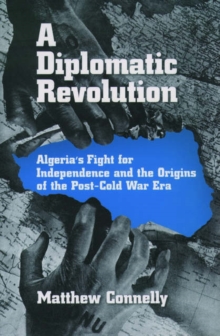 A DIPLOMATIC REVOLUTION: ALGERIA'S FIGHT FOR INDEPENDENCE AND THE ORIGINS OF THE POST-COLD WAR ERA

Product Description Algeria sits at the crossroads of the Atlantic, European, Arab, and African worlds. Yet, unlike the wars in Korea and Vietnam, Algeria's fight for independence has rarely been viewed as an international conflict. Even forty years later, it is remembered as the scene of a national drama that culminated with Charles de Gaulle's decision to "grant" Algerians their independence despite assassination attempts, mutinies, and settler insurrection. Yet, as Matthew Connelly demonstrates, the war the Algerians fought occupied a world stage, one in which the U.S. and the USSR, Israel and Egypt, Great Britain, Germany, and China all played key roles. Recognizing the futility of confronting France in a purely military struggle, the Front de Lib?ration Nationale instead sought to exploit the Cold War competition and regional rivalries, the spread of mass communications and emigrant communities, and the proliferation of international and non-governmental organizations. By harnessing the forces of nascent globalization they divided France internally and isolated it from the world community. And, by winning rights and recognition as Algeria's legitimate rulers without actually liberating the national territory, they rewrote the rules of international relations. Based on research spanning three continents and including, for the first time, the rebels' own archives, this study offers a landmark reevaluation of one of the great anti-colonial struggles as well as a model of the new international history. It will appeal to historians of post-colonial studies, twentieth-century diplomacy, Europe, Africa, and the Middle East. A Diplomatic Revolution was winner of the 2003 Stuart L. Bernath Prize of the Society for Historians of American Foreign Relations, and the Akira Iriye International History Book Award, The Foundation for Pacific Quest. Review "A brilliant volume of analysis, careful research, elegant writing, and the sensitive inclusion of multiple source materials ranging from demographic statistics to propaganda films."-- International Journal of African Historical Studies " A Diplomatic Revolution offers a fascinating argument based on a variety of multilingual and multi-archival sources that reflect the national discourse of the nations involved."-- African Studies Review "An ambitious book that succeeds admirably in its argument...In scope, and persuasiveness, A Diplomatic Revolution is unlikely to be surpassed as the best book about the Algerian revolution for many years to come."-- Journal of Cold War Studies "A. J.P. Taylor observed that historians 'talk so much about profound forces in order to avoid doing the detailed work' (p 141) Connelly is not one of them. His multiarchival research is impressive, especially his pioneering work in the recently available Algerian records. Above all, he has taken an innovative analytical approach, an engaging alternative to traditional diplomatic historiography."-- The International History Review "In concentrating on the international dimension, Connelly weaves into his story the changing roles of the United States, Gamal Abdel Nasser's Egypt, Morocco, and Tunisia; the ebb and flow of FLN relations with the soviet bloc; and much more."-- Foreign Affairs "Connelly's book is not a comprehensive history of the Algerian war, but a meticulous reconstruction of the global environment in which it occurred. By recasting the Algerian revolution as a contest between competeing 'transnational systems' he has shined a welcome new light on a struggle that has long been treated, for practical purposes, as an episode in the history of Fance and its empire, without suficient reference to the rest of the world, whose interests were most decidedly in play."-- Strategic Insights "This extensively researched study will provide extremely valuable information to scholars of decolonization, and represents a major contribution to the history of what one of the belligerent parties