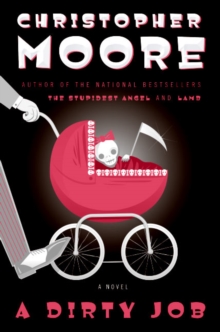 A DIRTY JOB: A NOVEL

Product Description Charlie Asher is a pretty normal guy. A little hapless, somewhat neurotic, sort of a hypochondriac. He's what's known as a Beta Male: the kind of fellow who makes his way through life by being careful and constant -- you know, the one who's always there to pick up the pieces when the girl gets dumped by the bigger/taller/stronger Alpha Male. But Charlie's been lucky. He owns a building in the heart of San Francisco, and runs a secondhand store with the help of a couple of loyal, if marginally insane, employees. He's married to a bright and pretty woman who actually loves him for his normalcy. And she, Rachel, is about to have their first child. Yes, Charlie's doing okay for a Beta. That is, until the day his daughter, Sophie, is born. Just as Charlie -- exhausted from the birth -- turns to go home, he sees a strange man in mint-green golf wear at Rachel's hospital bedside, a man who claims that no one should be able to see him. But see him Charlie does, and from here on out, things get really weird. . . . People start dropping dead around him, giant ravens perch on his building, and it seems that everywhere he goes, a dark presence whispers to him from under the streets. Strange names start appearing on his nightstand notepad, and before he knows it, those people end up dead, too. Yup, it seems that Charlie Asher has been recruited for a new job, an unpleasant but utterly necessary one: Death. It's a dirty job. But hey, somebody's gotta do it. Christopher Moore, the man whose Lamb served up Jesus' "missing years" (with the funny parts left in), and whose Fluke found the deep humor in whale researchers' lives, now shines his comic light on the undiscovered country we all eventually explore -- death and dying -- and the results are hilarious, heartwarming, and a hell of a lot of fun. From Publishers Weekly Cult-hero Moore ( The Stupidest Angel) tackles deathâ€”make that Deathâ€”in his latest wonderful, whacked-out yarn. For beta male Charlie Asher, proprietor of a shop in San Francisco, life and death meet in a maternity ward recovery room where his wife, Rachel, dies shortly after giving birth. Though security cameras catch nothing, Charlie swears he saw an impossibly tall black man in a mint green suit standing beside Rachel as she died. When objects in his store begin glowing, strangers drop dead before him and man-sized ravens start attacking him, Charlie figures something's up. Along comes Minty Freshâ€”the man in greenâ€”to enlighten him: turns out Charlie and Minty are Death Merchants, whose job (outlined in the Great Big Book of Death) is to gather up souls before the Forces of Darkness get to them. While Charlie's employees, Lily the Goth girl and Ray the ex-cop, mind the shop, and two enormous hellhounds babysit, Charlie attends to his dangerous soul-collecting duties, building toward a showdown with Death in a Gold Rushâ€“era ship buried beneath San Francisco's financial district. If it sounds over the top, that's because it isâ€”but Moore's enthusiasm and skill make it convincing, and his affection for the cast of weirdos gives the book an unexpected poignancy. (Apr.) Copyright Â© Reed Business Information, a division of Reed Elsevier Inc. All rights reserved. From Bookmarks Magazine It's certainly original. Even the harshest critic can't begrudge Christopher Moore his vivid imagination, satirical plots, and humor. Like a good sleight-of-hand artist, Moore builds up a huge reserve of goodwill to pull off his most demanding trick yet: laughing at death. The already-strained boundaries of his previous work ( Lamb, an alternate history of Jesus's life; Bloodsucking Fiends, a vampire love story; and The Stupidest Angel, concerning the resurrection of Santa Claus) stretch even further to produce this tale that critics praise for its "improbable humor" ( New York Times) and courage in "embracing what we fear" ( Washington Post).
Copyright Â© 2004 Phillips & Nelson Media, Inc. From Booklist Moore