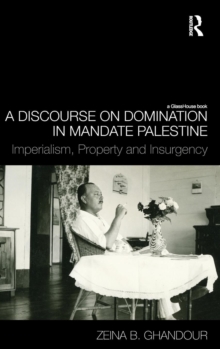 A DISCOURSE ON DOMINATION IN MANDATE PALESTINE: IMPERIALISM, PROPERTY AND INSURGENCY

by: Ghandour, Zeina B.
Format: Hardcover

Product description British discourse during the Mandate, with its unremitting convergence on the problematic â€˜native questionâ€™, and which rested on racial and cultural theories and presumptions, as well as on certain givens drawn from the British class system, has been taken for granted by historians. The validity of cultural representations as pronounced within official correspondence and colonial laws and regulations, as well as within the private papers of colonial officials, survives more or less intact. There are features of colonialism additional to economic and political power, which are glaring yet have escaped examination, which carried cultural weight and had cultural implications and which negatively transformed native society. This was inevitable. But what is less inevitable is the subsequent collusion of historians in this, a (neo-) colonial dynamic. The continued collusion of modern historians with racial and cultural notions concerning the rationale of European rule in Palestine has postcolonial implications. It drags these old notions into the present where their iniquitous barbarity continues to manifest. This study identifies the symbolism of British officialsâ€™ discourse and intertwines it with the symbolism and imagery of the nativesâ€™ own discourse (from oral interviews and private family papers). At all times, it remains allied to those writers, philosophers and chroniclers whose central preoccupation is to agitate and challenge authority. This, then, is a return to the old school, a revisiting of the optimistic, vibrant rhetoric of those radicals who continue to inspire post and anti-colonial thinking. In order to dismantle, and to undo and unwrite, A Discourse on Domination in Mandate Palestine holds a mirror up to the language of the Mandatory by counteracting it with its own integrally oppositional discourse and a provocative rhetoric. About the Author Zeina B. Ghandour is a Guest Teacher in the Law Department at the London School of Economics and Political Science and a Sessional Lecturer at Birkbeck College, University of London. Dr. Ghandour is also author of The HoneyÂ ,Â a novel. Her short stories have appeared inÂ various magazines and anthologies.