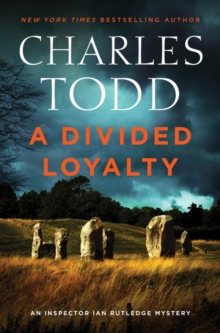 Product Description "Todd's astute character studies . . . offer a fascinating cross section of postwar life. . . . A satisfying puzzle-mystery."Â â€”Â The New York Times Book ReviewÂ  Scotland Yard Inspector Ian Rutledge is assigned one of the most baffling investigations of his career: an unsolved murder case with an unidentified victim and a cold trail with few clues to followÂ  A woman has been murdered at the foot of a megalith shaped like a great shrouded figure. Chief Inspector Brian Leslie, one of the Yardâ€™s best men, is sent to investigate the site in Avebury, a village set inside a prehistoric stone circle not far from Stonehenge. In spite of his efforts, Leslie is not able to identify her, much less discover how she got to Aveburyâ€”or why she died there. Her killer has simply left no trace.Â  Several weeks later, when Ian Rutledge has returned from successfully concluding a similar case with an unidentified victim, he is asked to take a second look at Leslieâ€™s inquiry. But Rutledge suspects Chief Superintendent Markham simply wants him to fail. Leslie was rightâ€”Avebury refuses to yield its secrets. But Rutledge slowly widens his search, until he discovers an unexplained clue that seems to point toward an impossible solution. If he pursues it and he is wrong, he will draw the wrath of the Yard down on his head. But even if he is right, he canâ€™t be certain what he can prove, and that will play right into Markhamâ€™s game. The easy answer is to let the first verdict stand: Person or persons unknown. But what about the victim? What does Rutledge owe this tragic young woman? Where must his loyalty lie? Review "Todd's astute character studies... offer a fascinating cross section of postwar life.... While delivering a satisfying puzzle-mystery, the story also tasks us to think about the women who lost their lives during the war, too."Â  ( The New York Times Book Review on AÂ  Divided Loyalty) â€œRutledge is one of the most complicated and finely drawn characters in contemporary crime fiction.... Thereâ€™s not a weak episode to be found in Toddâ€™s terrific series.â€ ( Bookpage (starred review) on A Divided Loyalty) "This is a series, written by a mother-and-son team under the Charles Todd pseudonym, that shows no signs of slowing down. As always, this one combines crisp plotting with stylish prose. Ideal for historical-mystery devotees." ( Booklist on A Divided Loyalty) â€œEach person dealt with the war differently, as Todd so poignantly shows with each character. Ianâ€™s resilience and his complex persona continue to make him an endearing character. And Todd, the mother-and-son writing team of Caroline and Charles Todd, continue their superior storytelling with A Divided Loyalty.â€ ( Sun-Sentinel (Florida)Â on A Divided Loyalty) â€œA Divided Loyalty finds Rutledge at his most vulnerable and persistent, and it is this dichotomy that gives the book its character and tense atmosphere. It is an intense ride to take with him, but one that is well worth it.â€ (Bookreporter.com Â on A Divided Loyalty) "Nobody evokes long postwar shadows or overwhelming postwar grief better than Todd." ( Kirkus Reviews on A Divided Loyalty) â€œFans of historical fiction surrounding WW1 should rely on these books. . . . A poignant and engrossing story.â€ ( Military Press on A Divided Loyalty) About the Author Charles Todd is theÂ New York TimesÂ bestselling author of the Inspector Ian Rutledge mysteries, the Bess Crawford mysteries, and two stand-alone novels. A mother-and-son writing team, they live on the East Coast.