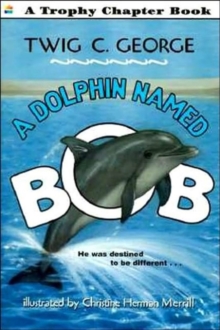 Product Description When Bob the dolphin was born, he was small and sickly, with an unusual comet-shaped mark on his drooping dorsal fin. No one at the aquarium expected him to survive. But like his mother, Aster, Bob was ornery, and he stubbornly struggled to overcome his health problems. And soon, he loved to leap high into the air and perform tricks. Then one day, Bob taught himself a new trick-and jumped into more trouble than any other dolphin in the history of the aquarium. With a dolphin like Bob around, you never know what will happen! Review "Exciting enough to keep young readers turning the pages."--"Kirkus Reviews About the Author Twig C. George was inspired to write Swimming with Sharks after she spent time studying and swimming with sharks in the Bahamas. She is also the author of A Dolphin Named Bob, illustrated by Christine Herman Merrill. She lives in Maryland. Twig C. George spent hours observing dolphins and collecting stories at the Natioanl Aquarium in Baltimore. She is the daughter of Jean Craighead George, and this is her first book for children. Ms. George lives in Cockeysville, MD. Christine Herman Merrill is one of America's foremost animal portrait painters. She has also illustrated Animals Who Have Won Our Hearts and There's an Owl in the Shower, both by Jean Craighead George. Ms. Merrill lives in Baltimore, MD.