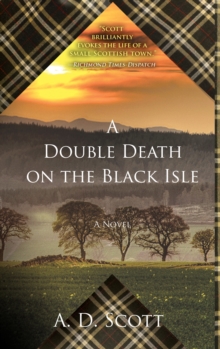 A DOUBLE DEATH ON THE BLACK ISLE: A NOVEL (2) (THE HIGHLAND GAZETTE MYSTERY SERIES)

by: Scott, A. D.
Format: Paperback

Product Description Two Women, Two Murders . . . A stunning and suspenseful story of families, betrayal, and a community divided. Nothing is ever quite at peace on Scotlandâ€™s Black Isleâ€”the Traveling people are forever at odds with the locals, the fishermen have nothing in common with the farmers, and the villages have no connection with the town. But when two deaths occur on the same day, involving the same families from the same estateâ€”the Black Isle seems as forbidding as its name. Joanne Ross, typist at the Highland Gazette, is torn whether to take on the plum task of reporting on these murdersâ€”after all, the woman at the center of both crimes is one of her closest friends. Joanne knows the story could be her big break, and for a woman in the mid-1950sâ€”a single mother, no lessâ€”good work is hard to come by. But the investigation by the staff on the Gazette reveals secrets that will forever change this quiet, remote part of the Highlands. The ancient feudal order is crumbling, loyalties are tested, friendships torn apart, and the sublime beauty of the landscape will never seem peaceful again. Review "Scott brilliantly evokes the life of a small Scottish town.â€ â€” Richmond Times-Dispatch â€œScottâ€™s writing is engaging, and her plotting Macbethian. The characters of the crusading small-town newspaper are skillfully drawn and will have readers rooting for them unequivocally.â€ â€” Booklist "The characters are engaging, and the suspense mounts along with a growing sense of dread as events surrounding the death of a young boy unfold." â€”Peter Robinson â€œThis mystery is a delight to unravel, with its lively dialect-sprouting players, inhabiting a lavishly described, forbidding but beautiful landscape.â€ â€” Kirkus â€œOh, what a delight, this book! Almost perfect in every way.â€ â€”William Kent Krueger "Brims with an intimate knowledge of the Scottish Highlandsâ€¦a novel to savor.â€" â€”Malla Nunn "An impressive first novelâ€¦Scott uses the background of religious intolerance, prejudice and petty jealousies, to bring together an engaging cast of warm and colorful characters." â€”Ann Cleeves â€œReadersâ€¦should enjoy Scott's careful attention to creating characters who convincingly belong to a past era's attitudes and values.â€ â€“ Publishers Weekly â€œSet against the bleak beauty of the Highlands, Scottâ€™s second ( A Small Death In a Great Glenn, 2010) continues to explore the slow transformation of Scotland from a highly ordered society while presenting a fine mystery with engaging characters." â€” Kirkus Reviews (starred) â€œAnother stunnerâ€¦Lots of action, lots of atmosphere, and above all, lots of fun.â€ â€” Booklist (starred) â€œAs patrician and working classes prepare to do battle, Scottâ€™s well-written mystery is lyrical and arresting." â€” Curledup.com (blog) About the Author A.D. Scott was born in the Highlands of Scotland and educated at Inverness Royal Academy and the Royal Scottish Academy of Music and Drama. She has worked in theater and in magazines, and is currently writing the next book in the acclaimed Highland Gazette mystery series. Excerpt. Â© Reprinted by permission. All rights reserved. Double Death on the Black Isle ONE Cycling across the suspension bridge over the wide, fast-flowing river Joanne Ross glanced downâ€”no, no bodies. She looked up at the pink-red castle filling the skyline and the town circling around itâ€”no, no ambulances, no fire engines, no accidents. On the last few panting yards up the cobbled steepness of Castle Wynd she looked towards the police station and courthouse, hoping for anyone, anything of interest. Then she caught herself. What are you? Some kind of ghoul? Wishing for death and drama so you can have a scoop on the front page of the Gazette? So you can impress your editor? So you can be somebody? It was Tuesday, the day before deadline on the Highland Gazette, and the weekly anxiety was always the same: Would it be the same roundup of the same stories of the same place and people, with