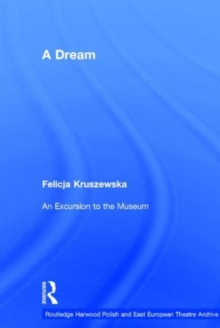 Product Description The translation of Felicja Kruszewska's A Dream introduces a major play by a twentieth-century female playwright to the English-speaking world. On March 7, 1927 A Dream - a large-scale expressionistic drama by an unknown poet - burst on the Polish theatrical scene in a dazzling debut production by the young actor Edmund Wiercinski, who would become one of the outstanding directors of his time. The play's hallucinatory visions of the rise of fascism and the heroine's longing for a providential savior on a white horse spoke directly to Polish audiences about their deepest anxieties. During the next two years A Dream received three additional stagings and became the subject of lively debate and controversy. The play, which has been successfully revived in 1974, is an outstanding example of European expressionism. The volume also contains An Excursion to the Museum, by the contemporary Polish poet, playwright, and short-story writer Tadeusz Rozewicz. A disturbing account of an utterly mundane visit to Auschwitz, the tale is a brilliant example of the playwright's technique of poetic collage. From Library Journal Born in 1897, Kruszewska achieved literary success as a poet and playwright in Poland during the 1920s and 1930s. "A Dream" was first performed in 1927 and is recognized as a masterpiece of Polish Expressionist theater. The play was rediscovered and brilliantly restaged in Gdan'.sk in 1974. Written as a parable, the drama looks at the rise of fascism and the longing of the Polish people for a knight on a white horse who will save the country. This work is effectively paired with "An Excursion to the Museum" by contemporary Polish poet and playwright RÂ¢zewicz. This short story is set in Auschwitz, now a museum and tourist attraction, and starkly reveals how the horrific past has been trivialized by current visitors who come for picnics and guided tours. This volume is recommended for extensive theater arts collections. Howard Miller, Rosary H.S. Lib., St. Louis Copyright 2002 Cahners Business Information, Inc. About the Author Jadwiga Kosicka is the author of A Life of Solitude, a biographical study of Stanislawa Przbyszewska. For Routledge Harwood's Polish and East European Theatre Archive, she has translated and edited To Steal a March on God by Hanna Krall.