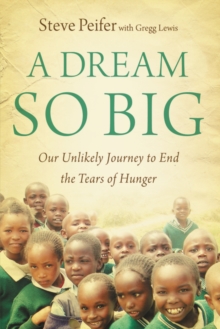 A DREAM SO BIG: OUR UNLIKELY JOURNEY TO END THE TEARS OF HUNGER

Product Description A Dream So Big is the story of Steve Peifer, a corporate manager who once oversaw 9,000 computer software consultants, who today helps provide daily lunches for over 20,000 Kenyan school children in thirty-five national public schools, and maintains solar-powered computer labs at twenty rural African schools. Steve and his wife, Nancy, were enjoying a successful management career with one of Americaâ€™s high tech corporate giants during the dot-com boom of the 1990â€™s when, in 1997, he and his wife Nancy discovered they were pregnant with their third child. Tragically, doctors said a chromosomal condition left their baby â€œincompatible with life.â€ The Peifers only spent 8 days with baby Stephen before he died. Seeking to flee the pain, Steve and Nancy began a pilgrimage that thrust them into a third-world setting where daily life was often defined by tragedy?drought, disease, poverty, hunger, and death. They didnâ€™t arrive in the service of any divine calling, but the truth of their surroundings spoke to their troubled hearts. A short-term, 12-month mission assignment as dorm parents for a Kenyan boarding school turned this ordinary man into the most unlikely internationally recognized hero, and his story will inspire you to pursue similar lives of service. About the Author Steve Peifer serves as Director of College Guidance for Rift Valley Academy in Kijabe, Kenya. He established a rural food program in 2002 that provides lunches for 20,000 Kenyan schoolchildren a day. He has also built the first solar-powered computer-training center in Kenya, and is now developing twenty computer classroom labs for rural schools. For his work on behalf of Kenyan children, he was awarded the CNN Heroes Award for Championing Children in 2007, the 2007Â Yale Counseling Award and the 2010 NACAC Excellence in Education Award. Steve and Nancy have four children. Gregg Lewis is an award-winning author and coauthor of more than fifty books, including Gifted Hands, The Ben Carson Story, Take the Risk and The Big Picture.