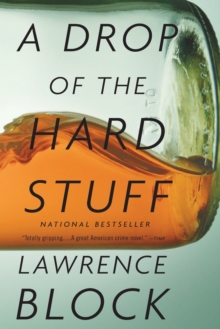 A DROP OF THE HARD STUFF (MATTHEW SCUDDER NOVELS)

Product Description Facing his demons in his first year of sobriety, Matthew Scudder finds himself on the trail of a killer. When Scudder's childhood friend Jack Ellery is murdered, presumably while attempting to atone for past sins, Scudder reluctantly begins his own investigation, with just one lead: Ellery's Alcoholics Anonymous list of people he wronged. One of them may be a killer, but that's not necessarily Scudder's greatest danger. Immersing himself in Ellery's world may lead him right back to the bar stool. In a novel widely celebrated by critics and readers, Lawrence Block circle back to how it all began, reestablishing the Matthew Scudder series as one of the pinnacles of American detective fiction. "Right up there with Mr. Block's best . . . A Drop of Hard Stuff keeps us guessing." -- Tom Nolan, Wall Street Journal Review "Totally gripping....A great American crime novel." ? Ed Park, Time "Block has so perfected a pared-down, hard-boiled style that this story--about good intentions that backfire, fatally--seems to tell itself." ? Maureen Corrigan, Washington Post Mesmerizing....A lament for all the old familiar things that are now almost lost, almost forgotten." ? Marilyn Stasio, New York Times Book Review "A DROP OF THE HARD STUFF is a wise and fascinating addition to the Matthew Scudder cannon. It could not be more welcome, nor could it have been written with more understated craftsmanship. The dialogue sounds exactly like things people say to each other, but it isn't. It's better, quicker, smarter. Read this book attentively. It's much more fun than taking lessons." ? Thomas Perry About the Author Lawrence Block is a Mystery Writers of America Grand Master who has won multiple Edgar and Shamus awards and countless international prizes. The author of more than 50 books, he lives in New York City.