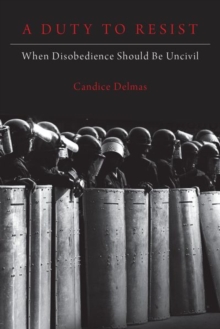 A DUTY TO RESIST: WHEN DISOBEDIENCE SHOULD BE UNCIVIL

Product Description What are our responsibilities in the face of injustice? How far should we go to fight it? Many would argue that as long as a state is nearly just, citizens have a moral duty to obey the law. Proponents of civil disobedience generally hold that, given this moral duty, a person needs a solid justification to break the law. But activists from Henry David Thoreau and Mohandas Gandhi to the Movement for Black Lives have long recognized that there are times when, rather than having a duty to obey the law, we have a duty to disobey it. Taking seriously the history of this activism, A Duty to Resist wrestles with the problem of political obligation in real world societies that harbor injustice. Candice Delmas argues that the duty of justice, the principle of fairness, the Samaritan duty, and political association impose responsibility to resist under conditions of injustice. We must expand political obligation to include a duty to resist unjust laws and social conditions even in legitimate states. For Delmas, this duty to resist demands principled disobedience, and such disobedience need not always be civil. At times, covert, violent, evasive, or offensive acts of lawbreaking can be justified, even required. Delmas defends the viability and necessity of illegal assistance to undocumented migrants, leaks of classified information, distributed denial-of-service (DDoS) attacks, sabotage, armed self-defense, guerrilla art, and other modes of resistance. There are limits: principle alone does not justify law breaking. But uncivil disobedience can sometimes be not only permissible but required in the effort to resist injustice. Review "Delmas systematically and compellingly demonstrates is that our political obligations as well as our latitude to disobey are farmore expansive, given the scale and scope of injustice, violence, and exploitation around us. On this front, Delmas' book stands as an original and significant contribution, and a challenge to accounts which fail to seriously consider what we owe to each other when we live within--and particularly when we benefit from--the conditions of systemic injustice." -- Erin R Pineda, European Journal of Political Theory "The elegance of her argument is that it takes received understandings of political obligation, and detaches them from an uncritical presumption towards duties of obedience... Delmas drives a persuasive and relatable argument through what might otherwise be treacherously broad, hazy territory... The book presents a robust but simple moral reasoning for uncoupling our political obligations from a presumed duty to obey - and one strongly relevant to our times." -- James Greenwood-Reeves, Journal of Law and Society, Volume 46, No 2. 2019 "In all, Delmas successfully guides us to reconsider the traditional "wisdom" of civil disobedience. She almost makes a strong case for expanding the notion of political obligation...to encompass a duty to resist." -- Ten-Herng Lai, Ethics "Delmas's book is a vitally important contribution to the literature that will reward close engagement from philosophers working in a variety of different fields of political theory." -- Christopher Finlay, Notre Dame Philosophical Reviews "a provocative and rewarding contribution to the literature particularly valuable for its attention to the question of the situational conditions of obligatory, potentially uncivil resistance" -- Suzanne Smith, LSE Review of Books "Delmas tries to detangle our obligations with a thorough taxonomy of principled disobedience ... Delmas suggests that we have to build a collective way of thinking together and resisting together." -- Nausicaa Renner, BookForum "Candice Delmas has produced a beautifully written, deeply engaged, and carefully constrained argument for uncivil disobedience under certain conditions. Her defense of resistance as both right and obligation is hard to resist, and readers who prefer civility will find in this book a worthy