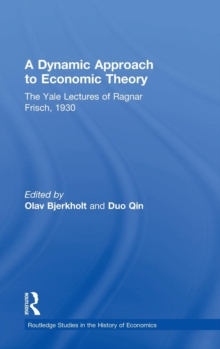 A DYNAMIC APPROACH TO ECONOMIC THEORY: THE YALE LECTURES OF RAGNAR FRISCH, 1930 (ROUTLEDGE STUDIES IN THE HISTORY OF ECONOMICS)

Product description This book contains a set of notes prepared by Ragnar Frisch for a lecture series that he delivered at Yale University in 1930. The lecture notes provide not only a valuable source document for the history of econometrics, but also a more systematic introduction to some of Frischâ€™s key methodological ideas than his other works so far published in various media for the econometrics community. In particular, these notes contain a number of prescient ideas precursory to some of the most important notions developed in econometrics during the 1970s and 1980s More remarkably, Frisch demonstrated a deep understanding of what econometric or statistical analysis could achieve under the situation where there lacked known correct theoretical models. This volume has been rigorously edited and comes with an introductory essay from Olav Bjerkholt and Duo Qin placing the notes in their historical context. Review '[These] Yale lectures help us to understand how the connection between mathematical reasoning and economics evolved in the formative period between the two world wars. Furthermore, these lectures reveal the profound intellectual debt Samuelson owes to the Norwegian economist. This debt is apprant not only in the area of the origins of dynamic analysis, where the connection is direct, but also in the general concept of economics as an empirical science and not simply a hypothetical-deductive paradigm.' -Mario Pomini, University of Padua, History of Economic Thought and Policy/2-2012 'The ingenuity visible in his view of traditional economic problems and the manifest creativity of his mind intrigue the contemporary reader today as they probably intrigued his audience in Paris eighty years ago.' - Ivan Moscati, University of Insubria About the Author Olav Bjerkholt is Professor of Economics at the University of Oslo. Duo Qin is Senior Lecturer in Economics at Queen Mary, University of London.