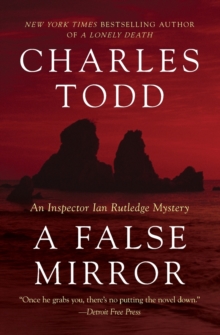 Product Description â€œFull of suspense, surprises, and sympathetic characters.â€â€”Fort Lauderdale Sun-Sentinel â€œNo mystery series I can think of captures the sadness and loss that swept over England after World War I with the heartbreaking force of Charles Toddâ€™s books about Scotland Yard Inspector Ian Rutledge.â€â€”Chicago Tribune The remarkable Charles Todd has created one of the most unforgettable characters in mystery and crime fiction: Inspector Ian Rutledge, shell-shocked veteran of â€œthe Great War.â€ A False Mirror is one of Toddâ€™s most powerful novels, plunging his tormented protagonist into the center of a brutal crime that painfully echoes events in Rutledgeâ€™s own past. Poignant, evocative, and continually surprising, A False Mirror is further proof that Charles Todd is well deserving of the critical acclaim the Rutledge novels have earned; a New York Times bestselling author who belongs among the acknowledged masters of the genre, including P. D. James, Elizabeth George, Ruth Rendell, and Jacqueline Winspear. From the Back Cover Unhealed scars of the Great War still torment Scotland Yard Inspector Ian Rutledge. A haunted, damaged shell of a man, he has been sent to the small coastal town of Hampton Regis to solve a violent crime and to confront his own tragic past. An officer who served with Rutledge in the trenches of France before being sent backto England under suspicious circumstances has now been accused of savagely beatingthe husband of the woman he still loves. The suspect has taken the wife hostage, threatening to kill her and her maid unless Rutledge takes charge of the investigation.Although the case painfully mirrors Rutledge's own past and the love he lost to another man, he cannot refuse it. When the unconscious brutalized victim vanishes without a trace,it's clear that this peaceful little town hides a vicious murderer and secrets powerful enough to kill for. About the Author Charles Todd is theÂ New York TimesÂ bestselling author of the Inspector Ian Rutledge mysteries, the Bess Crawford mysteries, and two stand-alone novels. A mother-and-son writing team, they live on the East Coast.