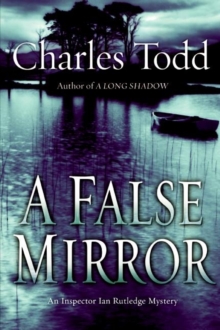 Product Description â€œFull of suspense, surprises, and sympathetic characters.â€â€”Fort Lauderdale Sun-Sentinel â€œNo mystery series I can think of captures the sadness and loss that swept over England after World War I with the heartbreaking force of Charles Toddâ€™s books about Scotland Yard Inspector Ian Rutledge.â€â€”Chicago Tribune The remarkable Charles Todd has created one of the most unforgettable characters in mystery and crime fiction: Inspector Ian Rutledge, shell-shocked veteran of â€œthe Great War.â€ A False Mirror is one of Toddâ€™s most powerful novels, plunging his tormented protagonist into the center of a brutal crime that painfully echoes events in Rutledgeâ€™s own past. Poignant, evocative, and continually surprising, A False Mirror is further proof that Charles Todd is well deserving of the critical acclaim the Rutledge novels have earned; a New York Times bestselling author who belongs among the acknowledged masters of the genre, including P. D. James, Elizabeth George, Ruth Rendell, and Jacqueline Winspear. From Publishers Weekly Starred Review. The complex, evocative ninth installment in Todd's series set in post-WWI England (after 2006's Long Shadow) showcases the pseudonymous author's usual subtle understatement and deft characterization. Scotland Yard Inspector Ian Rutledge, who has returned from the trench warfare of France haunted by the carnage (and in particular by his order to execute one of his own men), heads to the seaside village of Hampton Regis to defuse a hostage situation. Stephen Mallory, who served under Rutledge's command in the war and is suspected of viciously assaulting his ex-lover's husband, demands Rutledge's presence before he will release his ex-lover and other hostages. To manage the crisis, Rutledge must weather the suspicions of the local police and identify the person responsible for the assault and two subsequent murders. Todd, a mother-and-son writing team, seamlessly melds a fair-play whodunit with psychological suspense in the tradition of P.D. James's best. (Jan.) Copyright Â© Reed Business Information, a division of Reed Elsevier Inc. All rights reserved. From Booklist Motive, motive, motive. Is it jealousy? Money? Or something entirely different? Scotland Yard Inspector Rutledge must find the answer when he's summoned to the small town of Hampton Regis at the behest of Stephen Mallory, accused of viciously attacking one Matthew Hamilton. Afraid of being railroaded for a crime he insists he didn't commit, Mallory holds Hamilton's wife and her housekeeper hostage, hoping Rutledge can prove his innocence. It's tough going for Rutledge, who is dogged by unpleasant memories of Mallory, whom he knew while soldiering in the Great War, and by the echoing voice of Hamish, also a fellow soldier, whose imagined counsel steadies the investigator as he casts about for suspects. Todd, the pseudonym of a mother-son writing team, incorporates touches of both Sherlock Holmes and Agatha Christie in this character-driven mystery, which builds smoothly but not simply to a climax that is likely to be a genuine surprise. Stephanie Zvirin Copyright Â© American Library Association. All rights reserved From the Back Cover Hampton Regis, a small harbor town on the southern coast of England, is a most unlikely place for violence. Yet, one spring morning, a man is found on the strand so severely beaten that he slips in and out of consciousness. The prime suspect? His wife's jilted lover, who served with Rutledge in the recently ended Great Warâ€”but who left the Front under a cloud. Badly wounded, yes, but did someone also cover up cowardice? Rutledge is called on to prove the innocence of a man he dislikes and distrusts. But the deadly triangle also stirs up memories of the woman Rutledge himself loved and lost when he went to France to fight. His doubts about the accused and himself only deepen when the victim of the beating mysteriously disappears, with no body to be found. As the brilliant yet to