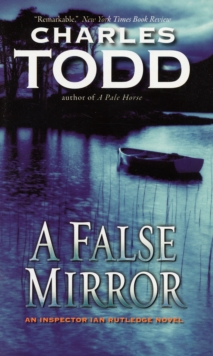 â€œNo mystery series I can think of captures the sadness and loss that swept over England after World War I with the heartbreaking force of Charles Toddâ€™s books about Scotland Yard Inspector Ian Rutledge.â€
â€”Chicago Tribune

The remarkable Charles Todd has created one of the most unforgettable characters in mystery and crime fiction: Inspector Ian Rutledge, shell-shocked veteran of â€œthe Great War.â€ A False Mirror is one of Toddâ€™s most powerful novels, plunging his tormented protagonist into the center of a brutal crime that painfully echoes events in Rutledgeâ€™s own past. Poignant, evocative, and continually surprising, A False Mirror is further proof that Charles Todd is well deserving of the critical acclaim the Rutledge novels have earned; a New York Times bestselling author who belongs among the acknowledged masters of the genre, including P. D. James, Elizabeth George, Ruth Rendell, and Jacqueline Winspear.