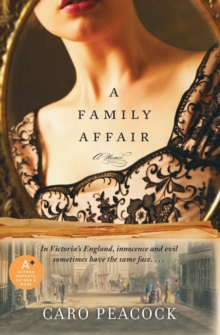 A FAMILY AFFAIR: A NOVEL

At the request of Queen Victoria's prime minister, Benjamin Disraeli, Liberty Lane is dispatched to Brinkburn Hall in search of answers. The deranged aristocrat Lord Brinkburn is nearing death, with his elder son, Stephen, eagerly waiting to inherit his title—until Lady Brinkburn's startling announcement that the heir is illegitimate. Chaos ensues.

The rivalry between Stephen and his younger brother, Miles, heats up dangerously. Liberty's arrival only stirs an already volatile mix, and she is greeted soon after by the odd disappearance of one brother . . . and by a shocking murder within the family's circle. Secrets and scandal run rampant throughout the cold and loveless Buckinghamshire estate far from the polish of London's aristocracy—as the plucky young investigator races to separate truth from falsehood, villains from victims, before death takes up a more permanent residence.