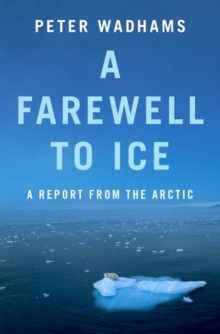 A FAREWELL TO ICE: A REPORT FROM THE ARCTIC

Product Description Based on five decades of research and observation, a haunting and unsparing look at the melting ice caps, and what their disappearance will mean. Peter Wadhams has been studying ice first-hand since 1970, completing 50 trips to the world's poles and observing for himself the changes over the course of nearly five decades. His conclusions are stark: the ice caps are melting. Following the hottest summer on record, sea ice in September 2016 was the thinnest in recorded history. There is now the probability that within a few years the North Pole will be ice-free for the first time in 10,000 years, entering what some call the "Artic death spiral." As sea ice, as well as land ice on Greenland and Antarctica, continues to melt, the rise in sea levels will devastate coastal communities across the world. The collapse of summer ice in the Artic will release large amounts of methane currently trapped by offshore permafrost. Methane has twenty-three times greater greenhouse warming effect per molecule than CO2; an ice-free arctic summer will therefore have an albedo effect nearly equivalent to that of the last thirty years. A sobering but urgent and engaging book, A Farewell to Ice shows us ice's role on our planet, its history, and the true dimensions of the current global crisis, offering readers concrete advice about what they can do, and what must be done. Review "In a new book . . . this most experienced and rational scientist states what so many other researchers privately fear but cannot publicly say - that the Arctic is approaching a death spiral which may see the entire remaining summer ice cover collapse in the near future." - John Vidal, The Guardian "Nonscientists who read his astonishing and hair-raising A Farewell to Ice will agree that the interludes of autobiography it contains are engrossing, entertaining and, when one submarine suffers an onboard explosion and fire while under the ice, harrowing. Any reader should find the science of sea-ice creation and the implications for us all of its loss - explored and explained here with clarity and style - beautiful, compelling and terrifying." - Horatio Clare, The Observer "Not only is A Farewell to Ice a clear and engaging account of how the physics and chemistry of ice work, but it also offers what may be the best chapter-length, reader-friendly account of the greenhouse effect available to date. . . . Wadhams's particular combination - of scientific passion, a lyrical sense of wonder at the natural world, an ability to pluck clear analogies from the air, and outspoken analysis of consumer-capitalist politics - marks out A Farewell to Ice as essential reading." - John Burnside, New Statesman "Peter Wadhams brings huge expertise to his subject - and he is an excellent writer. He explains why the fate of Arctic ice is crucial for the world's climate and clarifies the controversies and complexities that confront scientists and policymakers. A fascinating book." - Martin Rees, Astronomer Royal, President of the Royal Society 2005-10 "Peter Wadhams has written a passionate, authoritative overview of the role of ice in our climate system, past, present and, scarily, the future." - Carl Wunsch, Professor Emeritus of Physical Oceanography, Massachusetts Institute of Technology "Though the science behind global climate change can be made simple, its scientific complexities go a long way toward putting the impending catastrophe into context. A Farewell to Ice does an excellent job of laying out and explaining these complexities in all of their nuance... an excellent motivator and wake-up call..." -- Foreword Reviews "For almost five decades, Peter Wadhams has been studying the way the ice at both poles has been changing. What he reveals in A Farewell to Ice is a chilling view of how much influence humankind has had on the steady disappearance of polar ice and what that will mean for all living things on the planet as it continues to vanish." -- Shel