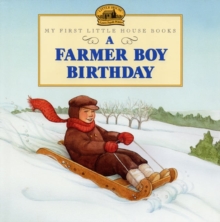 Product Description Long, long ago, a little boy named Almanzo Wilder lived on a farm in the New York countryside with his father, his mother, his big brother, Royal, and his big sisters, Eliza Jane and Alice. One special day is Almanzo's birthday. He gets to stay home from school, and even better, Father gives him a yoke for his calves, Star and Bright, and a beautiful hand-sled. Almanzo spends the morning learning how to break the calves, and then he spends the afternoon flying down the hill in his brand-new sled. Laura Ingalls Wilder's Little House books have been cherished by generations of readers. Now for the first time, the youngest readers can share Almanzo's adventures on the farm in these very special picture books adapted from Laura Ingalls Wilder's beloved storybooks. Jody Wheeler's warm paintings, inspired by Garth Williams' classic Little House illustrations, bring Almanzo and his family lovingly to life. About the Author Laura Ingalls Wilder (1867â€“1957) was born in a log cabin in the Wisconsin woods. With her family, she pioneered throughout Americaâ€™s heartland during the 1870s and 1880s, finally settling in Dakota Territory. She married Almanzo Wilder in 1885; their only daughter, Rose, was born the following year. The Wilders moved to Rocky Ridge Farm at Mansfield, Missouri, in 1894, where they established a permanent home. After years of farming, Laura wrote the first of her beloved Little House books in 1932. The nine Little House books are international classics. Her writings live on into the twenty-first century as Americaâ€™s quintessential pioneer story. Jody Wheeler is the illustrator of over forty books for children, including three picture books about Almanzo Wilder. She lives in New York City.