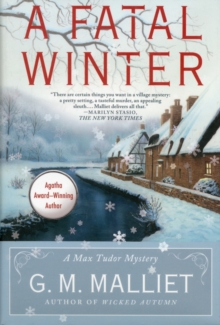 Product Description "There are certain things you want in a village mystery: a pretty setting, a tasteful murder, an appealing sleuth . . . Malliet delivers all that." ?Marilyn Stasio, The New York Times Last year, Agatha Award-winning author G. M. Malliet charmed mystery lovers, cozy fans, and Agatha Christie devotees with Wicked Autumn, the first mystery featuring her captivating protagonist, Max Tudor, and the small English village of Nether Monkslip. In A Fatal Winter, Max?Anglican priest, former MI5 agent, and village heartthrob?investigates two deaths at Chedrow Castle. But his growing attraction to Awena Owen complicates his case, as does the recent arrival at Chedrow Castle of a raucous group of long-lost, greedy relatives, any one of whom has a motive for murder. With a cozy setting, intricate puzzles, and a handsome (non-celibate) priest doing the sleuthing, the books in this series are destined to become instant classics in the mystery world. From Booklist A tiny village in the English countryside during a storm-wracked winter. A house party at the local castle that ends in two deaths. A dishy vicar, formerly an MI5 agent, summoned to the castle to solve the certain homicide of the lord. Put it all together, and this is one gift-wrapped package for cozy lovers and Agatha Christie devotees. But it is also a pretty cheeky cozy, written by someone who knows how to use the conventions and poke fun at them at the same time. In the second in the series starring vicar Max Tudor (following Wicked Autumn, 2011), Tudor escapes the amorous clutches of the church ladies in Nether Monkslip to visit Chedrow Castle in the wake of the deaths of Lord Footrustle and Lady Baynard. (An old cop friend wants Tudor on the scene to observe the viperâ€™s nest of relatives.) Tudorâ€™s observations on evil, honed by both his spy and vicar backgrounds, are one of the best features of this thoroughly entertaining mystery. --Connie Fletcher Review â€œAgatha Christie fans will relish [this] delicious novel.â€ ?Publishers Weekly (starred) â€œThere are certain things you want in a village mystery: a pretty setting, a tasteful murder, an appealing sleuth . . . Malliet delivers all that.â€ ?Marilyn Stasio, The New York Times, on Wicked Autumn â€œMalliet has mastered the delights of the cozy mystery so completely that she seems to be channeling Agatha Christie.â€ ?Booklist (starred) on Wicked Autumn â€œMalliet, like Louise Penny, brings a contemporary freshness to the traditional mystery.â€ ?Library Journal (starred) on Wicked Autumn â€œA superb novel! Filled with humor and insight, G.M. Malliet creates a fabulous setting in Nether Monkslip and a great series hero in Father Max Tudor. Rarely have I read descriptions that have left me gasping, in both their hilarity and their painful truth. A wonderful read.â€ ?Louise Penny, author of A Trick of the Light â€œIf you love traditional mysteries you'll enjoy Wicked Autumn... It's a classic, and one almost any reader will enjoy.â€ ?Charlaine Harris, author of the True Blood series, on Wicked Autumn â€œA tongue-in-cheek village mystery to be savored.â€ ?Julia Spencer-Fleming on Wicked Autumn About the Author A Fatal Winter is the second book in the Max Tudor series. The first in the series, Wicked Autumn, is currently nominated for an Agatha Award, and was one of five books shortlisted for the Dilys Award (an award given by booksellers for the book they most enjoyed selling during the previous year). G.M. Malliet won the Agatha Award for her first St. Just mystery, Death of a Cozy Writer, which initially won the Malice Domestic grant.