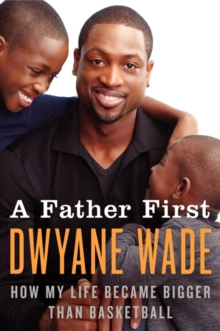 A FATHER FIRST: HOW MY LIFE BECAME BIGGER THAN BASKETBALL

Product Description Dwyane Wade of the Miami Heat is one of the superstars of the NBAâ€”and a Gold Medal winner at the Bejing Olympicsâ€”but heâ€™s A Father First.Â  In this moving and triumphant memoir, Wade shares his inspiring thoughts about fathers and sons, writing poignantly about the gratifying responsibilities of being a single dad to his two sons, Zaire and Zion, while recounting his own growing up years and his memorable rise to the top echelon of professional basketball. From the Back Cover Dwyane Wade, the eight-time All-Star for the Miami Heat, has miraculously defied the odds throughout his career and his life. In 2006, in just his third season in the NBA, Dwyane was named the Finals' MVP, after leading the Miami Heat to the Championship title, basketball's ultimate prize. Two years later, after possible career-ending injuries, he again rose from the ashes of doubt to help win a gold medal for the United States at the 2008 Beijing Olympics. As co-captain, he helped lead the Heat to triumph in the 2012 NBA Championship. Little wonder that legendary coach Pat Riley has called Dwyane "B.I.W."â€”Best In the World. As incredible as those achievements have been, it's off the court where Dwyane has sought his most cherished goal: being a good dad to his sons, Zaire and Zion, by playing a meaningful role in their lives. Recounting his fatherhood journey, Dwyane begins his story in March 2011 with the news that after a long, bitter custody battle, he has been awarded sole custody of his sons in a virtually unprecedented court decision. A Father First chronicles the lessons Dwyane has learned as a single dad from the moment of the judge's ruling that instantly changed his life and the lives of his boys, and then back to the events in the past that shaped his dreams, prayers, and promises. As the son of divorced parents determined to get along so that he and his sister Tragil could have loving relationships with both of them, Dwyane's early years were spent on Chicago's South Side. With poverty, violence, and drugs consuming the streets and their mom descending into addiction, Tragil made the heroic decision to take her younger brother to live with their father. After moving his household to suburban Robbins, Illinois, Dwyane Wade Sr. became Dwyane's first basketball coach. While this period laid the groundwork for Dwyane's later mission for fathers to take greater responsibility for their kids, he was also inspired by his mother's miraculous victory over addiction and her gift for healing others. Both his mother and his father showed him that the unconditional love between parents and children is a powerful guiding force. In A Father First, we meet the coaches, mentors, and teammates who played pivotal roles in Dwyane's stunning basketball careerâ€”from his early days shooting hoops on the neighborhood courts in Chicago, to his rising stardom at Marquette University in Milwaukee, to his emergence as an unheralded draft pick by the Miami Heat. This book is a revealing, personal story of one of America's top athletes, but it is also a call to actionâ€”from a man who had to fight to be in his children's livesâ€”that will show mothers and fathers how to step up and be parents themselves. About the Author DWYANE WADE played in the NBA from 2003 to 2019, primarily for the Miami Heat. He was selected as an NBA All-Star thirteen times, holds three NBA championships, and was named the 2006 NBA Finals Most Valuable Player. He is the Heatâ€™s all-time leader in points, games, assists, and steals, and the NBAâ€™s all-time leader for blocks by a guard. Â He is the New York Times bestselling author of A Father First. He lives with his wife Gabrielle Union, their daughter Kaavia, and his sons from his previous marriage, Zaire and Zion.