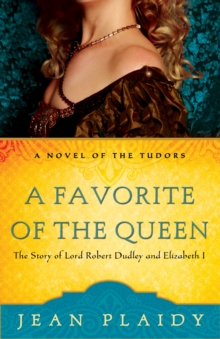 A FAVORITE OF THE QUEEN: THE STORY OF LORD ROBERT DUDLEY AND ELIZABETH I (A NOVEL OF THE TUDORS)

Product Description Torn between her heartâ€™s passion and duty to her kingdom, a young queen makes a dark choiceâ€¦ Â  Robert Dudley, Earl of Leicester was the most powerful man in England during the reign of Elizabeth I. Handsome and clever, he drew the interest of many womenâ€”but it was Elizabeth herself that loved him best of all. Their relationship could have culminated in marriage but for the existence of Amy Robsart, Robert's tragic young wife, who stood between them and refused to be swept away to satisfy a monarchâ€™s desire for a man that was not rightfully her own. But when Amy suddenly dies, under circumstances that many deem to be mysterious at best, the Queen and her lover are placed under a dark cloud of suspicion, and Elizabeth is forced to make a choice that will define her legacy. Review â€œPlaidy excels at blending history with romance and drama.â€ â€“ New York Times About the Author Jean Plaidy is the pen name of the prolific English author Eleanor Hibbert, also known as Victoria Holt. More than 14 million copies of her books have been sold worldwide. Plaidy passed away in 1993. Excerpt. Â© Reprinted by permission. All rights reserved. ONE Â  Â  It was hot, even for August; the foul odors from the river, carrying the threat of pestilence, hung in the sullen air that sultry day; but the crowds who were assembling on Tower Hill were oblivious of discomfort. Traders had left their shops or stalls in Candlewick Street, East Chepe, and the Poultry; horse-dealers were coming from Smithfield Square; the goldsmiths from Lombard Street, the mercers of Chepeside had deserted their houses, realizing that there could be little business at such a time. Apprentices, risking a whipping, crept out after their masters, determined to see what could be seen on Tower Hill that day. Â  Laughing and jesting they came. All men and women believed that the hardships of Henry VII's reign were behind them and the days of plenty were at hand. No more cruel taxes would be wrung from them; no more fines; no more impositions. The old miser King was dead and in his place was a bonny golden boy who laughed loudly, who jested and made sport, and loved to show himself to the citizens of London. Â  It was he who had provided this day's pleasure for them; and it clearly indicated what they might expect of him. Â  "God bless King Hal!" they cried. "See how he pleases his people! He is the one for us." Â  The cheers for the King mingled with the jeers for the traitors. Some apprentices had made two effigies which they held high above the crowd, to be mocked and pelted with refuse. Â  "Death to them! Death to the extortioners! Death to the misers, and long life to King Harry!" Â  Jostling, cursing, laughing, they surged about the hill. At the summit, close to the scaffold, members of the nobility were gathered. The bell of St. Peter ad Vincula had begun to toll. Â  At the edge of the crowd, not venturing into it, stood a boy. He was pale, soberly dressed, and was staring, mournful and bewildered, at the weather-washed walls of the great fortress which seemed to stand on guard like a stone giant. So grim, so cruel did it seem to the boy, that he turned his gaze from it to the green banks where the starry loose strife flowers were blooming. He remembered a dayâ€”long ago it seemed to him nowâ€”when he had taken his little brother to the river's edge to pick flowers. He remembered how they had strolled along, arms full of blossom. The flower of the water betony was like the helmet a soldier would wear, and he was reminded that soldiers would soon be coming out of the great prison, and with them would be the men who were to die on Tower Hill that day. Â  "Death to the traitors!" shouted a man near him. "Death to the tax-gatherers! Death to Dudley and Empson!" Â  The little boy felt the blood rush to his face, for his name was John Dudley, and his father was one of those who would shortly lay their heads upon the block. Â  Â  He would not look, this little