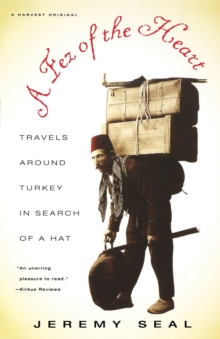 A FEZ OF THE HEART: TRAVELS AROUND TURKEY IN SEARCH OF A HAT

Product Description Inspired by a dusty fez in his parentsâ€™ attic, Jeremy Seal set off in 1993 to trace the astonishing history of this cone-shaped hat. Soon the quintessentially Turkish headgear became the key to understanding a country beset by contradictions. â€œA modern travel classicâ€ (Herald Express). Amazon.com Review Upon the orders of Kemal Ataturk, the fez replaced the turban as Turkey's national headdress. Outlawed completely in 1925, the turban is viewed as a symbol of Turkish backwardness. While living and teaching in Turkey for several years, Jeremy Seals developed an obsession for the fez, a hat he believes has come to symbolize the soul of the country. Through interviews with villagers and historical essays, Seals chronicles his journey through Turkey, to areas both metropolitan and remote, to find the heart of the country as embodied by its national head gear. From Publishers Weekly What is more Turkish than the fez? Almost anything, as it turns out. Just two years after Turkey was officially proclaimed a republic in 1923, Mustafa Kemal Ataturk outlawed the fez. For Ataturk, the maroon felt headgear foisted on Turkey's turbaned Ottoman precursors by a similarly reform-minded ruler, Mahmud II, just 100 years earlier, symbolized Turkey's backwardness?unlike the European hats Ataturk himself favored. It's not taking anything away from the book to say that first-time author Seal, after traipsing through Ankara, Istanbul, Cappadocia and many much more obscure Turkish towns (as well as the Moroccan city of Fez), doesn't discover the origins of the fez. But aided by fluent Turkish (it fails him once when he believes a host has invited him to hunt Kurds, only to discover that the game is kurts, or wolves) and wry sensibility, he does offer both an engaging, often very funny travelogue and real insights into Turkey's troubled balancing act between modernity and tradition, between Europe and Islam. For those who were surprised by the plurality gained by Turkey's pro-Islamic Refah (or Welfare) Party in the most recent elections, Seal's book shows that we could all learn a lot from a hat. Copyright 1996 Reed Business Information, Inc. From Library Journal To appreciate this book, one must be familiar with Turkish history. On May 19, 1919, Turkey emerged as a nation with its own identity. In 1925, Ataturk outlawed the fez and ordered the hanging of anyone wearing it. The 1920s and 1930s were the modernization years-out with the old ways (fezzes and Islam), in with the new (census, adoption of surnames). In one fell swoop, the Turkey of yore had all but vanished. This tale is about one man's search for that disappearing culture by exploring that strange land of fezzes and turbans-the last remnants of the Ottoman Empire. Through his constant quest for fez sightings, the author, a former language teacher in Turkey, thickly intertwines Middle Eastern/Turkish history, culture, politics, sociology, and travel into a most unusual and insightful book. He takes the reader on a yearlong journey through the Turkey of 1992-93 in search of the genuine land and people who formerly were characterized and identified by their unique tasseled, felt, conical, maroon or black hat. Recommended for history buffs and armchair time travelers. Ann E. Cohen, Rochester P.L., N.Y. Copyright 1996 Reed Business Information, Inc. From Booklist In 1925, Ataturk, the father of modern Turkey, banned the wearing of the fez as part of his plan to modernize Turkey. Seal uses the fez as a symbol in his search for the traditional Turkey. He visits rural areas, especially in the eastern part of the country, and although he doesn't find any Turks wearing fezzes, he discovers traditional views still flourishing and, in some places, evidence of Islamic fundamentalism. For the armchair traveler (most tourists wouldn't want to visit these backwater towns), this is a readable overview of a westernized and secularized country still beset by contradi