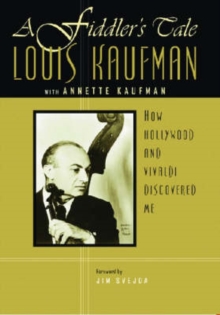 A FIDDLER'S TALE: HOW HOLLYWOOD AND VIVALDI DISCOVERED ME

Product Description This fascinating memoir, written by one of the greatest American violinists of the twentieth century, recounts an extraordinary life in music. Once called by the New York Times "a violinist's violinist and a musician's musician," Louis Kaufman was born in 1905 in Portland, Oregon. He studied violin with Franz Kneisl at New York's Institute of Musical Art. He was the original violist of the Musical Art Quartet (1926-1933) and won the Naumburg Award in 1928, the year of his American solo recital debut in New York's Town Hall. During these early years, he played chamber music with Pablo Casals, Mischa Elman, Jascha Heifetz, Fritz Kreisler, Gregor Piatigorsky, and Efrem Zimbalist, among others. After performing the violin solos for Ernst Lubitsch's 1934 film The Merry Widow, Kaufman became the most sought after violin soloist in Hollywood, playing in some 500 films, including Casablanca, Gone with the Wind, The Diary of Anne Frank, Wuthering Heights, The Grapes of Wrath, and Spartacus. He worked closely with Robert Russell Bennett, Bernard Herrmann, Erich Wolfgang Korngold, Alfred Newman, MiklÃ³s RÃ³zsa, Max Steiner, Franz Waxman, and Victor Young. Extraordinary as it seems today, Kaufman was largely responsible for bringing the once-forgotten music of Antonio Vivaldi to its current popularity worldwide among both classical musicians and the general population of music lovers. The book includes a music CD with Kaufmanâ€™s performances of Vivaldiâ€™s Concerto 2 of op. 9, Havanaise by Camille Saint SaÃ«ns, Nocturne for Violin and Piano by Aaron Copland, Much Ado about Nothing Suite for violin and piano by Erich Wolfgang Korngold, and Smoke Gets in Your Eyes by Jerome Kern, among other favorites. Review "It was Louis Kaufman, perhaps more than any other single performer, who gave American film music its voice." About the Author Louis Kaufman (1905â€“1994) was probably the most-recorded violinist in history, with recordings of more than one hundred major concert works and hundreds of film soundtracks to his credit. Annette Kaufman (1914â€“2016), a pianist, shared Louis's passion for music, art, and theater as they traveled the globe on performance tours. She carried forward their joint vision in the completion of this book and in her support for the arts. Excerpt. Â© Reprinted by permission. All rights reserved. "It was Louis Kaufman, perhaps more than any other single performer, who gave American film music its voice."-Jim Svejda, from the foreword