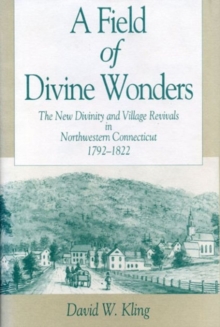 A FIELD OF DIVINE WONDERS: THE NEW DIVINITY AND VILLAGE REVIVALS IN NORTHWESTERN CONNECTICUT, 1792–1822 (KENNETH SCOTT LATOURETTE PRIZE IN RELIGION AND MODERN LITERATURE)

It began as a trickle in 1792, but by century's end northwestern Connecticut was awash in revival. In 1799 Edward Dorr Griffin wrote that he could stand at his doorstep in Litchfield County and "number fifty or sixty congregations laid down in one field of divine wonders." Griffin was one of the leading ministers whose electrifying preaching triggered the Second Great Awakeningâ€”the subject of this award-winning study.

A Field of Divine Wonders focuses on the village revivals sparked by Griffin and his fellow New Divinity ministersâ€”the theological heirs of Jonathan Edwards. Edwards died in 1758â€”long before the rash of revivals in 1798â€”but he left an enduring legacy that later generations of disciples followed. But it was the third generation of Edwardseans, pastors such as Griffin, Asahel Nettleton, and Bennet Tyler, who personified the theology of revival. For thirty years, they successfully preached, counseled, and defended the New Divinity message of salvation until the mid-1820s when most of the leaders had passed from the scene and New Divinity revivalism had lost its appeal. Nevertheless, there remained a form of piety rooted in Edwards's teaching on "affectionate" religion, which merged with other evangelical traditions and has endured up to our own day.

Unlike previous studies focused chiefly on leaders or institutions, or theology or converts, A Field of Divine Wonders integrates the history of ideas with newer approaches in historical researchâ€”collective biography, modes of discourse, gender studies, social and quantitative history, and local community studiesâ€”to supply the kind of "new religious history" that historians have long called for.