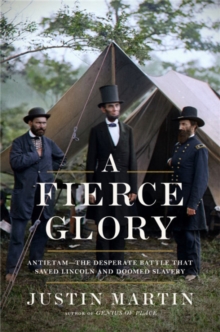 Product Description On September 17, 1862, the "United States" was on the brink, facing a permanent split into two separate nations. America's very future hung on the outcome of a single battle--and the result reverberates to this day. Given the deep divisions that still rive the nation, given what unites the country, too, Antietam is more relevant now than ever. The epic battle, fought near Sharpsburg, Maryland, was a Civil War turning point. The South had just launched its first invasion of the North; victory for Robert E. Lee would almost certainly have ended the war on Confederate terms. If the Union prevailed, Lincoln stood ready to issue the Emancipation Proclamation. He knew that freeing the slaves would lend renewed energy and lofty purpose to the North's war effort. Lincoln needed a victory to save the divided country, but victory would come at a price. Detailed here is the cannon din and desperation, the horrors and heroes of this monumental battle, one that killed 3,650 soldiers, still the highest single-day toll in American history. Justin Martin, an acclaimed writer of narrative nonfiction, renders this landmark event in a revealing new way. More than in previous accounts, Lincoln is laced deeply into the story. Antietam represents Lincoln at his finest, as the grief-racked president--struggling with the recent death of his son, Willie--summoned the guile necessary to manage his reluctant general, George McClellan. The Emancipation Proclamation would be the greatest gambit of the nation's most inspired leader. And, in fact, the battle's impact extended far beyond the field; brilliant and lasting innovations in medicine, photography, and communications were given crucial real-world tests. No mere gunfight, Antietam rippled through politics and society, transforming history. A Fierce Glory is a fresh and vibrant account of an event that had enduring consequences that still resonate today. Review "A colorful, deft, beautifully paced account of the bloodiest battle in American history. Justin Martin carefully tends Antietam's 'glowing embers,' approaching the day on the ground and from every angle."-- Stacy Schiff, Pulitzer Prize-winning author of Cleopatra and The Witches? - "More than the repulse of a Confederate invasion, the Union victory at Antietam paved the way for black freedom--thus proving, in its way, the most important battle of the Civil War. Appropriately, A Fierce Glory is more than a military history (although it depicts the actual fighting vividly). Martin has culled a vast array of sources to explore the political, religious, medical, and, ultimately, the societal impact of Antietam. A highly original work."-- Harold Holzer, winner of the Gilder Lehrman Lincoln Prize? - "What an achievement! Both panoramic and intimate in scale, it situates Antietam within the context of Civil War history but also takes the reader in close, face to face with the personal reality of 19th century warfare."-- Amanda Vaill, author of Hotel Florida: Truth, Love, and Death in the Spanish Civil War? - "With a great eye for colorful detail, Martin has pulled off the feat of contextualizing the battle for a general audience. I learned something new on every page--not just about Lincoln, McClellan, and Lee, but about medical pioneers Clara Barton and Jonathan Letterman, photographer Alexander Gardner, and the fates of average soldiers on both sides. An absorbing read."-- Jonathan Alter, New York Times bestselling author of The Promise: President Obama, Year One? - "Martin has given us an engrossing, important new look at Antietam, making a convincing case that the outcome had more impact on the course of the war, and on U.S. history, than any other Civil War engagement."-- Marc Leepson, author of Desperate Engagement: How a Little-Known Civil War Battle Saved Washington, D.C., and Changed American History? - "Martin takes you to the fabled Antietam battlefield in an engagingly written 'you are there' style tha