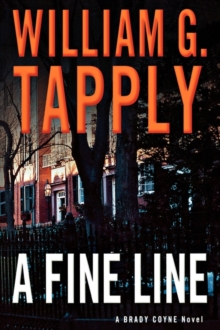 Walter Duffy was the world's leading bird photographer until an accident crippled him. So Boston lawyer Brady Coyne, an old friend, makes a point of visiting him in his bird-filled garden terrace--until the day Brady finds him lying next to his crutches, fatally bashed in the back of the head. Was it an accident or murder? Where is Walter's college-age son, who was also his much abused household helper? Who keeps calling Brady at odd hours, tipping him off to upcoming arson fires? And what's it all got to do with a packet of letters allegedly written by Meriwether Lewis?

This is Brady Coyne's 19th solo outing, and fans will find their hero just as likable, even-tempered, and incorruptible as ever. They'll also appreciate his growing relationship with companion Eve Banyon (who may be unrealistically gorgeous and devoted, but whose presence gives rise to one of the best sex-in-a-thunderstorm scenes you'll read this year). The suspense in A Fine Line is on the mild side, and the slightly disconnected plot concludes with a too-neat wrap-up. But you'll still enjoy reading Tapply for his fully fleshed people, his evocation of Boston, and his lean prose, which--as always--goes down as smoothly as 16-year-old single malt. --Nicholas H. Allison