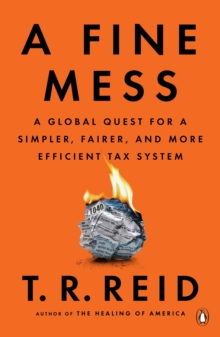 A FINE MESS: A GLOBAL QUEST FOR A SIMPLER, FAIRER, AND MORE EFFICIENT TAX SYSTEM

Product Description New York TimesÂ bestelling author T. R. Reid travels around the world to solve the urgent problem of America's failing tax code, unravelling a complex topic in plain English - and telling a rollicking story along the way.Â  The U.S. tax code is a total write-off. Crammed with loopholes and special interest provisions, it works for no one except tax lawyers, accountants, and huge corporations. Not for the first time, we have reached a breaking point. That happened in 1922, and again in 1954, and again in 1986. In other words, every thirty-two years. Which means that the next complete overhaul is due in 2018. But what should be in this new tax code? Can we make the U.S. tax system simpler, fairer, and more efficient? Yes, yes, and yes. Can we cut tax rates and still bring in more revenue? Yes. Â  Other rich countries, from Estonia to New Zealand to the UKâ€”advanced, high-tech, free-market democraciesâ€”have all devised tax regimes that are equitable, effective, and easy on the taxpayer.Â  But the United States has languished. So byzantine are the current statutes that, by our governmentâ€™s own estimates, Americans spend six billion hours and $10 billion every year preparing and filing their taxes. In the Netherlands that task takes a mere fifteen minutes! Successful American companies like Apple, Caterpillar, and Google effectively pay no tax at all in some instances because of loopholes that allow them to move profits offshore. Indeed, the dysfunctional tax system has become a major cause of economic inequality. Â  In A Fine Mess, T. R. Reid crisscrosses the globe in search of the exact solutions to these urgent problems. With an uncanny knack for making a complex subject not just accessible but gripping, he investigates what makes good taxation (no, thatâ€™s not an oxymoron) and brings that knowledge home where it is needed most. Never talking down or reflexively siding with either wing of politics, T. R. Reid presses the case for sensible root-and-branch reforms with a companionable ebullience. This affects everyone. Doing our taxes will never be America's favorite pastime, but it can and should be so much easier and fairer. Review â€œ[C]harmingâ€¦ Reid takes us on a world tour of tax systems and the efforts to reform them. He approaches this most disliked specialty of the dismal science of economics with a wry voice and a light touchâ€¦ a rich and sturdy fabric of facts presented in plain English. As a longtime Washington Post foreign correspondent, Reid knows how to make the distant seem close. His eye for the telling detail is sharpâ€¦ Those unfamiliar with economics, accounting or tax law will be better able to understand these subjects by reading â€œA Fine Mess.â€â€¦ With enough readers, Reid might even help us to initiate real tax reform by replacing a tax code so complex it includes the anti-complexity rule in Section 7803(c)(2)(B).â€â€” David Cay Johnston, The New York Times Book Review â€œA fun book on taxes. It's terrific.â€â€” Fareed Zakaria, CNN's Global Public Square â€œAn exploration of the absurd complexity of the American tax system and an astute comparison to many examples of simpler, effective tax collection by other governments around the world.Â  Throughout his well-reported, clearly written exposÃ© of United States tax policy, [Reid] reveals the follies of the concept of American exceptionalism and the misguided pride of presidents, members of Congress, and Internal Revenue Service commissionersâ€¦.Though Reid's topic may be anathema to many readers, he makes it relentlessly revelatory and simple to understand.â€ â€”Kirkus Reviews [starred] â€œHighly readable and informativeâ€¦offers solid solutions and predicts the time for change has come.â€ â€” Publishers WeeklyÂ  About the Author T. R. Reid is a longtime correspondent for The Washington Post and former chief of its Tokyo and London bureaus. He is a commentator for National Public RadioÂ and has been a correspondent for several PBS documentaries. His bestselling