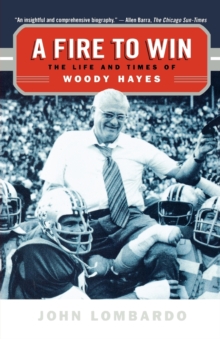 A FIRE TO WIN

Product Description Woody Hayes was one of the greatest football coaches in history---and one of the most fascinating. More than a brilliant coach, he was a complicated, contradictory man. The former history teacher ran his football empire as an absolute monarchy, but had a surprisingly altruistic side, hidden from the public,. and author John Lombardo uses his extensive sports-writing experience to craft an accurate portrait of one of the most complex and fascinating figures in football. First and foremost, Woody Hayes was a coach---and his achievements are stunning. While at Ohio State, he won five national titles, and thirteen Big Ten Conference championships, made eight Rose Bowl appearances, and earned two national Coach of the Year awards. Moreover, Hayes's lifetime coaching record, 238--72--10, puts him in the first rank of college coaching immortals. No other coach won more games in a shorter period. Countless interviews of former players, assistant coaches, and friends shape the image of Hayes and his career, which spanned the mid-1940s to the late 1970s during a tremendous period of change in American society. A Fire to Win is an honest and revealing biography of Hayes, a man who ranks in the pantheon of football coaches. "An easy-to-read, objective look at one of Ohio's most powerful, complex, admired, feared, and contradictory figures."---The Columbus Dispatch "A sympathetic yet evenhanded examination of a modern coaching giant."---Booklist "Insightful and comprehensive biography."---The New York Sun "Contradictions, of course, are what make Hayes fascinating. And Lombardo delves into those contradictions with a cell biologist's eye for detail and a landscape painter's eye for perspective."---Chicago Tribune Review â€œThis is a sympathetic yet evenhanded examination of a modern coaching giant.â€ ? Booklist About the Author John Lombardo, a sportswriter based in Chicago, is the author of Raiders Forever: Stars of the NFL's Most Colorful Team Recall Their Glory Days. Lombardo lives in Winnetka, Illinois, with his wife and two daughters.