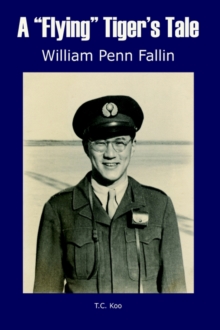 TC Koo, (Koo Teh Chang) lived one of the most fascinating lives imaginable. He was born in 1916 in Washington, D.C. where his father, Dr. Wellington Koo, was a diplomat in the Chinese Legation. At the time of his birth his maternal grandfather, Tong Shao?Yi, was Premier of China and TC's father was to destined to follow in his father? in? law's footsteps less than ten years later.This story is about TC Koo, his family, his many friends and a few of his enemies. It is about the trials, tribulations (and rewards) of growing up in a lofty environment; and about his many experiences, running the gamut from joyful to terrifying. He literally grew up in the midst of history in the making and witnessed first hand what you are about to read.I present this work as a simple (and woefully incomplete) biography, which is derived from recorded conversations between Mr. Koo and me as well as notes he kept in his personal journals. Dates, names and places have been checked for verification using every source available.TC and I were well aware that in such endeavors (especially when dealing in memory) there are opportunities for errors. In case such errors are discovered we offer our sincere apologies in advance.TC Koo was a most unusual man, as you about to discover. He lived a story matched by few mortals. Serving as an officer in the Chinese Air Force during World War II (as an important member of General Claire Chennault's "Flying Tigers" staff) is only one of many interesting periods in his colorful life.He was appointed to his post, with General Chennault by none other than Generalissimo Chiang Kai?shek himself. He later served as China's Air Force representative on the staff of General Douglas MacArthur during the early stages of the Allied occupation of Japan.TC and I first met in 1973 when he was on a business trip to Illinois. Later when I moved to Taipei to start up an Asian operation for our corporation we renewed our friendship and it grew until we became "bestfriends"