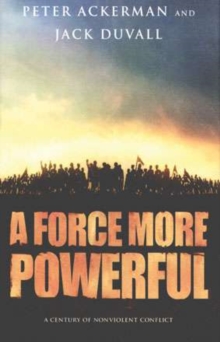 A FORCE MORE POWERFUL: A CENTURY OF NONVIOLENT CONFLICT

"In a contest of violence against violence," the philosopher Hannah Arendt observed, "the superiority of the government has always been absolute." When confronted with nonviolent resistance on the part of the downtrodden, however, governments have often crumbled--witness the fall of South Africa's apartheid regime and the ousting of Slobodan Milosevic in Yugoslavia.

The worldwide spread of democracy in the 20th century, documentary writers Peter Ackerman and Jack DuVall maintain, "would not have come to pass without the power of ordinary people who defied oppressive rulers not by force of arms, but by nonviolent action." By way of example, they cite the collapse of the Argentine military regime following peaceful protests by the mothers of men and women who had been murdered by the secret police; the eventual undermining of the Polish Communist regime by the nonviolent Solidarity labor movement; the refusal of the Danish people to comply with the laws of their Nazi occupiers during WorldÂ WarÂ II; and the exemplary work done in India (and, earlier, South Africa) by Mohandas Gandhi, who took pains to emphasize that nonviolence does not imply passivity.

Ackerman and DuVall's book, the companion volume to a PBS television series, will be of much interest to political activists of all stripes, as well as to students of contemporary history. --Gregory McNamee