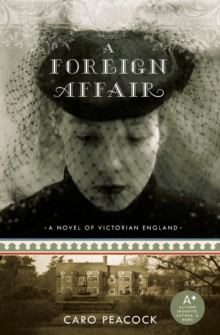 A remarkable debut novel rich in atmosphere, color, and suspense, Caro Peacock's A Foreign Affair is an irresistible blend of history, adventure, and ingenious invention that brings an extraordinary new writerâ€”and a truly endearing and unforgettable heroineâ€”to the literary stage.

The year is 1837. Queen Victoria, barely eighteen, has just ascended to the throne of England, and a young woman named Liberty Lane has just had her first taste of true sorrow. Refusing to accept that her gentle, peace-loving father has been killed fighting a duel, she vows to see justice done. . . .

The trail she follows is a twisting and dangerous one, leading the spirited young Englishwoman into an intricate weave of conspiracy. Contacted by secret agents, she is asked to pose as a governess in order to infiltrate cold, rambling Mandeville Hall and spy on its master, Sir Herbert Mandeville, who is at the center of a treasonous plan.

Nothing at the hall is what it seems, and every turn reveals another deceit, another surprise, another peril, leaving Libby to wonder who to trust and embroiling her in a deadly affair that could destroy the young queen and place Libby herself in mortal peril. . . .