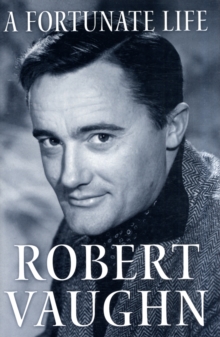 Product Description A remarkable and delightful memoir of a life spent in the uppermost circles of acting, politics, and the world Â  Robert Vaughn was born an actor. His family worked in the theater for generations, and he knew from the very start that he would join them.Â  In his fifty-year career, Vaughn has made his mark in roles on stage, in film, and on television the world over. In A Fortunate Life, he describes some of the one-of-a-kind experiences heâ€™s enjoyed in his celebrated career.Â Â Â Â Â Â Â Â Â Â Â Â  A Fortunate Life reveals the details of his early years in Hollywood, when he found himself appearing as often in the gossip magazines as on screen, and he recounts insider stories about such legendary figures as Judy Garland, Bette Davis, Charlton Heston, Oliver Reed, Jason Robards, Richard Harris, Yul Brynner, Elizabeth Taylor, and many more. Vaughnâ€™s work in The Young Philadelphians, The Magnificent Seven, Superman III, and many other films won kudos from critics and peers alike. Worldwide recognition came when he starred in the smash hit series The Man from U.N.C.L.E., and he vividly describes the extraordinary experience of becoming, quite suddenly, one of the worldâ€™s brightest stars.Â Â Â Â Â Â Â Â Â Â Â Â  Vaughn warmly recalls his romances with stars like Natalie Wood and his adventures with friends like Steve McQueen and James Coburn, but equally important was his involvement in the politics of the 1960s. The first actor to publicly speak out against the war in Vietnam, he served as national chairman of Dissenting Democrats, the largest antiwar organization in the U.S. He gave hundreds of speeches denouncing the war, debated William F. Buckley on national TV, and helped persuade his friend Robert F. Kennedy to run for president in 1968---only to see the race end in tragedy.Â Â Â Â Â Â Â Â Â Â  With a wealth of moving, wonderfully entertaining and often jaw-dropping stories from the worlds of acting and politics,Â A Fortunate LifeÂ is a must-read for fans of Robert Vaughn and anyone who wants a glimpse behind the scenes of classic Hollywood. Review â€œRobert Vaughn is a gifted storyteller. He writes breathtakingly well, capturing English prose-poetry with all the joy of an eminent Casanova. Here in this Fortunate Life you will find elegant bawdiness, ribald tales, plus a rowdy, outrageous recounting of the doings of the famous and the infamous in the worlds of theater, politics, and business. You will read about hair-raising escapes from the Soviet invasion and from an extortionate situation in South America. Vaughn is modest on his success and hilarious on the subject of his failures. There is an astonishing revelation on the subject of Robert Kennedyâ€™s assassination. A Fortunate Life is no mere â€˜then Iâ€¦â€™ book stuffed with fluff. It has life, love, laughter, tragedy, but above it all hilarity and is indeed inspiring.â€ ---Malachy McCourt,, author of A Monk Swimming About the Author Robert Vaughn has appeared in more than a hundred motion pictures, including The Magnificent Seven, Bullitt (for which he won a British Oscar nomination), and The Young Philadelphians, which earned him an Academy Award nomination. His work in television has earned him an Emmy among other honors, and his role as Napoleon Solo on the hit television series The Man from U.N.C.L.E. has earned him lasting fame. The series won the Hollywood Foreign Press Golden Globe as the best television show in the world in 1965. Vaughn received the Photoplay Gold Medal award as the most popular actor in America, presented to him by the previous yearâ€™s winner, John Wayne. Vaughn is also a serious student of politics and world affairs.Â  He played a leading role in the antiwar movement of the 1960s.Â  He received his Ph.D. from the University of Southern California in 1970, and his book on the Hollywood blacklist, Only Victims, was published in 1972. Vaughn has most recently starred in the BBC/AMC Original Series Hustle. He lives in Connecticut with his wife, Linda, and