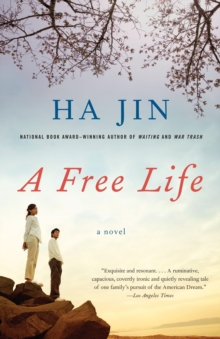 Product Description A New York Times Notable Book One of the Best Books of the Year: Chicago Tribune, Chicago Sun-Times, Entertainment Weekly, Slate Â In A Free Life, Ha Jin follows the Wu family â€” father Nan, mother Pingping, and son Taotao â€” as they sever their ties with China in the aftermath of the 1989 massacre at Tiananmen Square and begin a new life in the United States. As Nan takes on a number of menial jobs, eventually operating a restaurant with Pingping, he struggles to adapt to the American way of life and to hold his family together, even as he pines for a woman he loved and lost in his youth. Ha Jin's prodigious talents are in full force as he brilliantly brings to life the struggles and successes of the contemporary immigrant experience. Review â€œExquisite and resonant...Jin has fashioned a ruminative, capacious, covertly ironic and quietly revealing tale of one family's pursuit of the American Dream.â€ â€”Los Angeles Times Â  â€œStriking. . . . Jin's language has ripened into something extraordinary.â€ â€”The Washington Post Book World Â  â€œ[A Free Life] transforms the genreâ€¦. The narrative unfolds on such an intimate, domestic scaleâ€¦that it takes a while to realize that this is also an epic.â€ â€”Robert Pinsky, Slate Â  â€œA leisurely, generous taleâ€¦.As vast and unbounded as the brave and overwhelming new world it describes.â€ â€”Boston Globe About the Author Ha Jin left his native China in 1985 to attend Brandeis University. He is the author of the internationally bestselling novel Waiting, which won the PEN/Faulkner Award and the National Book Award, and War Trash, which won the PEN/Faulkner Award for Fiction, and was a Finalist for the Pulitzer Prize and the Kiriyama Pacific Rim Book Prize; the story collections The Bridegroom, which won the Asian American Literary Award, Under the Red Flag, which won the Flannery Oâ€™Connor Award for Short Fiction, and Ocean of Words, which won the PEN/Hemingway Award; the novels The Crazed and In the Pond; and three books of poetry. His latest novel, A Free Life is his first novel set in the United States. He lives in the Boston area and is a professor of English at Boston University. War Trash, The Crazed, The Bridegroom, Waiting, In the Pond, and Ocean of Words are available in paperback from Vintage Books. Excerpt. Â© Reprinted by permission. All rights reserved. Chapter OneFinally Taotao got his passport and visa. For weeks his parents had feared that China, even if not closing the door outright, would restrict the outflow of people. After the Tiananmen massacre on June 4, 1989, all the American airlines except United had canceled their flights to Beijing and Shanghai. At the good news, Pingping burst into tears. She quickly rinsed the colander in which she had drained the shredded turnip for her jellyfish salad, took off her apron, and set out with her husband, Nan Wu, for the town center of Woodland, where the office of Travel International was located.The plane ticket cost seventy percent more than the regular fare because it had not been purchased three weeks in advance. The Wus didn't hesitate; as long as Taotao could get out of China in time and safely, it was worth any price. They also bought round-trip tickets from Boston to San Francisco for themselves.Neither Pingping nor Nan could go back to China to fetch Taotao, who had been staying with Pingping's parents for the past three years. And since no one in Pingping's family had a passportâ€”not to mention the difficulty in getting a visa from the U.S. embassyâ€”the boy would have to fly by himself. Pingping's brother, a middle school physics teacher who had just returned to their parents' home for the summer vacation, had agreed to take his nephew from Jinan City to Shanghai. There Taotao would be left in the hands of the American flight attendants. Barely six, he wasn't allowed to change planes unaccompanied, so his parents would have to go and collect him in San Francisco. The travel agent, a bosomy brunette with oliv