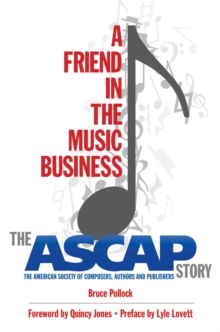 A FRIEND IN THE MUSIC BUSINESS: THE ASCAP STORY

Product Description On February 13, 1914, a group of the nation's most distinguished and popular songwriters gathered together in New York City to support the mission of ASCAP, a new organization for publishers and songwriters. A few years later, ASCAP received its mandate from the Supreme Court to collect royalties for the public performance of copyrighted material. Over the course of the next century, ASCAP has been as prominent a force for the advancement and nurture and financial well-being of songwriters as any record label or publishing outfit one would care to name. With a responsive board of directors made up entirely of songwriter/composer and publisher members, ASCAP has defended creators' rights at every turn against those who would seek to devalue music. Today, with copyright under renewed assault, its mission is as resonant and vital as ever, along with its relatively new role as a nurturer of the young artists who represent the future of music. Award-winning music writer Bruce Pollock explores the growth and changes within this complex society and its relationship to emerging technologies, in the context of 100 years of an ever-evolving music business, to see how ASCAP has become, for those who hope to make a living making music, now more than ever, â€œa friend in the music business.â€ Review This 300+ page book (with a Foreword by [Quincy] Jones and a Preface by Lyle Lovett) goes over interesting parts of [ASCAP's] legacy, including the changes that have come about the business due to radio, TV, rock and roll, the internet and its competition with BMI. A fascinating insight to an underappreciated and overlooked side of the music business, this book will give you a behind the scenes peek at an organization that has helped the music survive and grow. --Jazz Weekly Songwriters all over the world are undoubtedly familiar with the acronym ASCAP. But how many know what it stands for (American Society of Composers, Authors and Publishers) and more importantly, what does the organization do for the performing songwriter? Award-winning author Bruce Pollock breaks it all down for the reader in ''A Friend In The Music Business: The ASCAP Story.'' The nearly 300 pages are filled with interviews, anecdotes and a chronology of major events and players who shaped the organization from its inception in New York City in 1914 to its position today as a major advocate for the protection of songwriter's rights. Pollock, a veteran music industry journalist, details these ups and downs with a loose but informative style. --American Songwriter If you're a songwriter, you know about ASCAP. And if you're not but still love music, you should know about them. The American Society of Composers, Authors, and Publishers is the agency that collects royalties for the public performances of its members' copyrighted music. In other words, every time a song is played on the radio, television, cable, in a restaurant or club or online, ASCAP is there to make sure the money is paid to the person/s who wrote the song. This is a fascinating look at an organization that is not only engaged in the very real endeavor of collecting money for songwriters but has also become an arbiter of taste in recent years. The idea of stealing music from the Internet--downloading songs from illegal sites has become commonplace--is now pervasive. ASCAP has had to battle that practice and has tried to make online sites pay for the music the''re so carelessly giving away. If you're a songwriter, you know how hard it is to make a living making music. ASCAP is indeed your best friend, and reading this book will get you up close and personal. --Curled Up With A Good Book About the Author Bruce Pollock (Fairfield, CT) has been called â€œthe most important scholar of American pop musicâ€ by the late Greg Shaw. He is the author of 13 books, including Working Musicians: Defining Moments from the Road, the Studio, and the Stage and Rock Song Index. For 17 years he was the editor of Pop