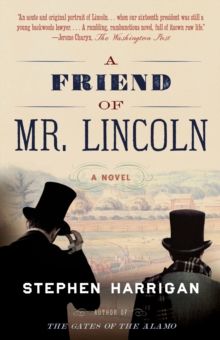 A FRIEND OF MR. LINCOLN

Product Description It is Illinois in the 1830s, and Abraham Lincoln is an ambitiousâ€”if charmingly awkwardâ€”young circuit lawyer and state legislator. Among his friends and political colleagues are Joshua Speed, William Herndon, Stephen Douglas, and many others who have come to the exploding frontier town of Springfield to find their futures. One of these men is poet Cage Weatherby. Cage both admires and clashes with Lincoln, questioning his cautious stance on slavery. But he stays by Lincoln's side, even as Lincoln slips back and forth between high spirits and soul-hollowing sadness and depression, and even as he recovers from a disastrous courtship to marry the beautiful, capricious, politically savvy Mary Todd. Mary will bring stability to Lincoln's life, but she will also trigger a conflict that sends the two men on very different paths into the future. Review A St. Louis Post-Dispatch Best Book of the Year â€œAn acute and original portrait of Lincoln â€¦ when our sixteenth president was still a young backwoods lawyer. . . . A rumbling, rambunctious novel, full of its own raw life.â€ â€”Jerome Charyn, The Washington Post Â  â€œEmotionally rich and exquisitely poignant. . . . Harrigan masterfully immerses readers in the story, the era, its sensibilities and its characters.â€ â€”James Endrst, USA Today Â  â€œA novel of real rewards.â€ â€”Laird Hunt,Â  The New York Times Book Review Â  â€œBrings us closer than ever to the human Abraham Lincolnâ€”struggling, reflective, fundamentally noble and so much more appealing than the pasteboard deity of popular myth.â€ â€”David S. Reynolds, The Wall StreetÂ Journal â€œSplendid . . . Quickly engages the reader's imagination with its deep perspective, rich historical authenticity and a lively cast of striving, imperfect humans.â€ â€” Dallas Morning News Â  â€œDelightful . . . A fictional friend named Cage Weatherby gives readers an up-close glimpse of the rough-hewed country lawyer â€¦ who longs to achieve something meaningful.â€ â€” The Christian Science MonitorÂ  Â  â€œMeticulously researched, gorgeously rendered, A Friend of Mr. Lincoln is a powerful historical novel of friendship, love and ambition.â€ â€” The Huffington Post Â  â€œ[An] imaginativeâ€”though largely faithful to the historical recordâ€”account of the future president's early career.â€ â€” Chicago Tribune â€œHarrigan will fascinate readers with his bits of everyday history.â€Â â€” St. Louis Post-Dispatch Â  â€œA fine work that anyone curious about Lincoln's rough and ready days would enjoy reading.â€ â€” The Houston Chronicle Â  â€œTremendous.â€ â€” The New York Journal ofÂ Books Â  â€œAn astute look at the public and private sides of the young Abraham Lincoln and the agonizing struggles he endured trying to reconcile the two." â€” BooklistÂ  (starred review) "In the genre of historical fiction, Stephen Harrigan is the gold standard. . . . No historical novelist working today beats Harrigan at capturing the nuances of a particular zeitgeist . . . and then harnessing his research to a plot of invention so engaging that all a reader can do is keep turning the pages, spellbound." â€”Hampton Sides, author of In the Kingdom of Ice â€œRichly drawn . . . Harrigan shows a young Lincoln in all his moods and temperaments, providing context with vividly detailed historical events." â€” Library Journal (starred review) â€œHarrigan knows his Lincoln and knows how to write. Even when he lets his imagination soar, it is always tethered to the evidence.Â The result is historical fiction at its very best.â€ â€”Joseph J. Ellis, author of The QuartetÂ and Founding Brothers â€œSuperb. . . . Â Harriganâ€™s standout novel shows the endurance of friendship.â€ â€” Publishers Weekly (starred review) About the Author Stephen Harrigan is the author of nine previous books, including The New York Times bestseller The Gates of the Alamo and Remember Ben Clayton, which among other awards won the James Fenimore Cooper Prize from the Society of American Historians for best historical novel. He is also a writer-at-large fo