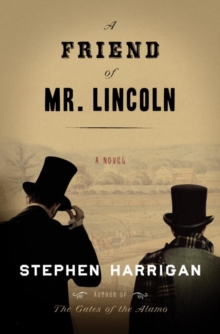 A FRIEND OF MR. LINCOLN: A NOVEL

Product Description The author of the best-selling The Gates of the Alamo now gives us a galvanizing portrait of Abraham Lincoln during a crucially revealing period of his life, the early Springfield years, when he risked both his sanity and his ethical bearings as he searched for the great destiny he believed to be his. It is Illinois in the 1830s and 1840s. Abraham Lincoln is a circuit-riding lawyer, a member of the state legislature, a man of almost ungovernable ambition. To his friends he is also a beloved figure, by turns charmingly awkward and mesmerizingly self-possessedâ€”a man of whom they, too, expect big things. Among his friends and political colleagues are Joshua Speed, William Herndon, Stephen Douglas, and many others who have come to the exploding frontier town of Springfield to find their futures.Â  Â Â Â  It is through another friend, a fictional poet, Cage Weatherby, that we will come to know Lincoln in his twenties and thirties, as a series of formative, surprising incidents unfoldsâ€”his service in the Black Hawk War, his participation in a poetry-writing society, a challenge to a duel that begins as a farce but quickly rises to lethal potential . . . Cage both admires and clashes with Lincoln, sometimes questioning his legal ethics and his cautious stance on slavery. But he is by Lincolnâ€™s side as Lincoln slips back and forth between high spirits and soul-hollowing sadness and depression, and as he recovers from a disastrous courtship of one woman to marry the beautiful, capricious, politically savvy Mary Todd. It is Mary who will bring stability to Lincolnâ€™s life, but who will also trigger a conflict that sends the two men on very different paths into the future. Historically accurate, rich in character, filled with the juice and dreams and raw ambitions of Americans on the make in an early frontier city, A Friend of Mr. Lincoln is a revelatory and moving portrayal of Abraham Lincoln in his young manhood. It is a close-up, involving experience, the sort of vibrant glimpse beneath the veneer of history that only the very best fiction can provide. Review "Meticulously researched, gorgeously rendered, A Friend of Mr. Lincoln is a powerful historical novel of friendship, love and ambition.â€ â€”Mary Pauline Lowry, Huffington Post Â  "A tremendous novel . . . Harrigan delivers an insightful envelope into Lincolnâ€™s character development, from roughhousing young man to the astute president preserving the nation.Â  Here we find Lincolnâ€™s profound sense of morality, integrity, and courage.Â  He was at once audacious and contrite, powerful and meek, content and morose.â€ â€”Charles S. Weinblatt, New York Journal ofÂ Books "Delightful . . . A fictional friend named Cage Weatherby gives readers an up-close glimpse of the rough-hewed country lawyer in Springfield, Ill., who longs to achieve something meaningful. Up to the heartbreaking final sentence, Harrigan renders a gorgeous tale of an improbable, bittersweet journey." â€” Christian Science MonitorÂ  "[An] imaginativeâ€”though largely faithful to the historical recordâ€”account of the future president's early career as a young lawyer, politician and reluctant swain in Springfield in the 1830's and '40's.Â  Seen through the eyes of a fictionalÂ poet, Cage Weatherby, Lincoln emerges as a hyperambitious, socially awkward, sometimes bawdy, occasionally depressed young man whose tragic destiny is still far in the future." â€”Kevin Nance, Chicago Tribune "Harrigan will fascinate readers with his bits of everyday history . . .Â We remember Lincolnâ€™s name. And if you read A Friend of Mr. Lincoln, you will remember the book.â€Â â€”Harry Levins, St. Louis Post-Dispatch Â  "A fine work that anyone curious about Lincoln's rough and ready days would enjoy reading." â€”Conrad Bibens, Houston Chronicle "A novel of real rewards.Â Â  Not least among them is Harrigan's ability to vividly and economically evoke his vanished world. . . . He excels at exploring crucible moments and pays Lincoln, as well as