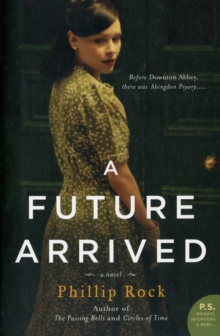 Product Description Before Downton Abbey, there was Abingdon Pryory... The third installment in Phillip Rock's trilogy that came alive with The Passing Bells and continued with Circles of Time, begins with the fading of the Jazz Age in England, and ends with German bombers on the horizon. A Future Arrived, the conclusion to the epic Grevilles of Abingdon saga, contains a P.S. section with additional insights from the author, background material, suggestions for further reading, and more. Review â€œ A Future Arrived is a wonderfully old-fashioned book. . . full of characters who value honor, nobility, courage and commitment . . . refreshing.â€ (Los Angeles Times) From the Back Cover The final installment of the saga of the Grevilles of Abingdon Pryory begins in the early 1930s, as the dizzy gaiety of the Jazz Age comes to a shattering end. What follows is a decade of change and uncertainty, as the younger generation, born during or just after the "war to end all wars," comes of age. American writer Martin Rilke has made his journalistic mark, earning worldwide fame with his radio broadcasts, and young Albert Thaxton seeks to follow in his footsteps as a foreign correspondent. Derek Ramsey, born only weeks after his father fell in France, and Colin Ross, a dashing Yankee, leave their schoolboy days behind and enter fighter pilot training as young men. The beautiful Wood-Lacy twins, Jennifer and Victoria, and their passionate younger sister, Kate, strive to forge independent paths, while learning to loveâ€”and to let go. In their heady youth and bittersweet growth to adulthood, they are the futureâ€”but the shadows that touched the lives of the generation before are destined to reach out to their own. About the Author Born in Hollywood, California, Phillip Rock lived in England with his family until the blitz of 1940. He spent his adult years in Los Angeles and published three novels before the Passing Bells series: Flickers, The Dead in Guanajuato, and The Extraordinary Seaman. He died in 2004.