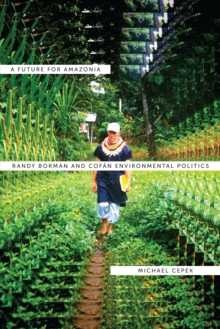 A FUTURE FOR AMAZONIA: RANDY BORMAN AND COFáN ENVIRONMENTAL POLITICS

Product Description Blending ethnography with a fascinating personal story, A Future for Amazonia is an account of a political movement that arose in the early 1990s in response to decades of attacks on the lands and peoples of eastern Ecuador, one of the world's most culturally and biologically diverse places. After generations of ruin at the hands of colonizing farmers, transnational oil companies, and Colombian armed factions, the indigenous CofÃ¡n people and their rain forest territory faced imminent jeopardy. In a surprising turn of events, the CofÃ¡n chose Randy Borman, a man of Euro-American descent, to lead their efforts to overcome the crisis that confronted them. Drawing on three years of ethnographic research, A Future for Amazonia begins by tracing the contours of CofÃ¡n society and Borman's place within it. Borman, a blue-eyed, white-skinned child of North American missionary-linguists, was raised in a CofÃ¡n community and gradually came to share the identity of his adoptive nation. He became a global media phenomenon and forged creative partnerships between CofÃ¡n communities, conservationist organizations, Western scientists, and the Ecuadorian state. The result was a collective mobilization that transformed the CofÃ¡n nation in unprecedented ways, providing them with political power, scientific expertise, and a new role as ambitious caretakers of more than one million acres of forest. Challenging simplistic notions of identity, indigeneity, and inevitable ecological destruction, A Future for Amazonia charts an inspiring course for environmental politics in the twenty-first century. Review "It is a well-crafted and nicely combined account of an ethnographic study with the personal story of Randy Bormanâ€¦it is a must read for all those who want to understand the ecological sustainability efforts of indigenous people around the world in general, and the success story of the CofÃ¡n in Amazonia in particular." ( Indigenous Peoples, Issues, and Resources 2013-07-10) "We must thank Michael Cepek for an ethnography that not only sheds light on indigenous cultural resistance, but also allows us to imagine such questions." ( Journal of Latin American Studies 2013-07-01) "Whatâ€™s the fate of the Amazonâ€™s ecology and indigenous people? Is cultural and biological destruction inevitable? This may be the predominant message we hear emanating from the global discourse, but, as we read in Michael Cepekâ€™s lively and richly textured account of the CofÃ¡n people of eastern Ecuador, we may have reason to be more optimistic." ( American Ethnologist) "It is exciting and always refreshing to read an ethnography that, as Cepek puts it, uses empirical investigation of an existing liberatory project to help us conceptualize alternative futures of hope and possibility." ( American Anthropologist) " A Future for Amazonia is ideal for those in search of a rich, readable, ethnography that provides a remarkably rich account of an Amazonian indigenous people and how they have developed the political capacity to take on multinational oil, negotiate the Ecuadorian state, and secure a future that is at least partially hopeful. In short, this book makes an argument for why ethnography remains important for understanding much of what defines Latin America, from natural resource extraction and imperialism to indigenous movements, the â€˜NGOizationâ€™ of political life, and the broader struggle for cultural and economic survival." ( Anthropology and Humanism) "This book will be of interest to environmental anthropologists for its depiction of divergent cultural models of environmental conservation and ecological cosmovisions, and to scholars in Latin American studies for its analysis of indigenous social movements and their complex relationships with states and transnational NGO networks. It also makes important contributions to the emerging field of NGO studies by examining how the adoption of the NGO form entails the transformation of community identi