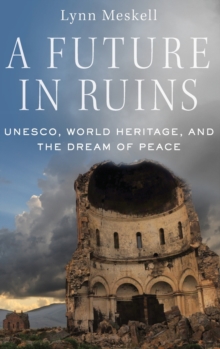 A FUTURE IN RUINS: UNESCO, WORLD HERITAGE, AND THE DREAM OF PEACE

Product Description Best known for its World Heritage program committed to "the identification, protection and preservation of cultural and natural heritage around the world considered to be of outstanding value to humanity," the United Nations Educational, Scientific and Cultural Organization (UNESCO) was founded in 1945 as an intergovernmental agency aimed at fostering peace, humanitarianism, and intercultural understanding. Its mission was inspired by leading European intellectuals such as Henri Bergson, Marie Curie, Albert Einstein, Thomas Mann, H. G. Wells, and Aldous and Julian Huxley. Often critiqued for its inherent Eurocentrism, UNESCO and its World Heritage program today remain embedded within modernist principles of "progress" and "development" and subscribe to the liberal principles of diplomacy and mutual tolerance. However, its mission to prevent conflict, destruction, and intolerance, while noble and much needed, increasingly falls short, as recent battles over the World Heritage sites of Preah Vihear, Chersonesos, Jerusalem, Palmyra, Aleppo, and Sana'a, among others, have underlined. A Future in Ruins is the story of UNESCO's efforts to save the world's heritage and, in doing so, forge an international community dedicated to peaceful co-existence and conservation. It traces how archaeology and internationalism were united in Western initiatives after the political upheavals of the First and Second World Wars. This formed the backdrop for the emergent hopes of a better world that were to captivate the "minds of men." UNESCO's leaders were also confronted with challenges and conflicts about their own mission. Would the organization aspire to intellectual pursuits that contributed to the dream of peace or instead be relegated to an advisory and technical agency? An eye-opening and long overdue account of a celebrated yet poorly understood agency, A Future in Ruins calls on us all to understand how and why the past comes to matter in the present, who shapes it, and who wins or loses as a consequence. Review "A timely and important work that combines anthropology, politics, and archaeology to consider the history and legacy of UNESCO (United Nations Educational, Scientific and Cultural Organization).... The author's honest, thought-provoking treatment brings into question the abilities and benefits of UNESCO while highlighting some of the complex political and historical actions that have brought about the precarious role it now plays.... Highly recommended."-- CHOICE "Reading A Future in Ruins is a valuable experience that needs to be shared widely across archaeology, cultural heritage studies, and related disciplines. It is a process of revisiting the consequences of allowing the bureaucratic machine of 'world heritage production' to roll on unchallenged, a journey which is best undertaken without predetermined notions coming from a detailed review of its contents." -- Emily Hanscam , European Journal of Archaeology " A Future in Ruins transcends the boundaries of history, archaeology, politics and anthropology? an enlightening and enjoyable book to read." -- Mohamed Gamal Abdelmonem, Traditional Dwellings and Settlements Review "This is a highly original and timely reassessment of UNESCO's checkered global mission since the late 1940s. While Meskell's book is ostensibly about UNESCO, world heritage, and the changing practices of archaeology, it is also a powerful rereading of international history and the broader politics of preservation in today's world. For those interested in the history of internationalism, contemporary global politics, and heritage studies, this is a must read." --Paul Betts, University of Oxford " A Future in Ruins represents the first in-depth analysis of UNESCO from its heady beginnings in a postwar world to the very different political and cultural attitudes to heritage in the present. Meskell brings her considerable analytical skills to bear on the personalities and structu