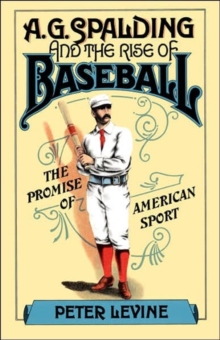 A. G. SPALDING AND THE RISE OF BASEBALL: THE PROMISE OF AMERICAN SPORT

A. G. Spalding was a key figure in the professionalization and commercialization of American sports. Co-founder of baseball's National League, owner of the Chicago White Stockings (later Cubs), and founder of a sporting goods business that made him a millionaire, Spalding not only willed baseball to be our national pastime but also contributed to making sport a significant part of American life.
This biography captures the zest, flamboyance, and creativity of Albert Goodwell Spalding, a man of insatiable ego, a showman and entrepreneur, whose life illuminated the hopes and fears of 19th-century Americans. It is also a vivid evocation of the vanished world of 19th-century baseball, recreating a time when it was transformed from a game played on unkempt fields to modern style.