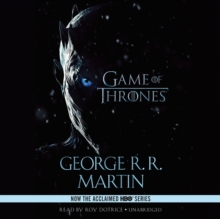 A GAME OF THRONES: A SONG OF ICE AND FIRE: BOOK ONE

Product Description NOW THE ACCLAIMED HBO SERIES GAME OF THRONES Here is the first volume in George R. R. Martinâ€™s magnificent cycle of novels that includes A Clash of Kings and A Storm of Swords. As a whole, this series comprises a genuine masterpiece of modern fantasy, bringing together the best the genre has to offer. Magic, mystery, intrigue, romance, and adventure fill these pages and transport us to a world unlike any we have ever experienced. Already hailed as a classic, George R. R. Martinâ€™s stunning series is destined to stand as one of the great achievements of imaginative fiction. A GAME OF THRONESLong ago, in a time forgotten, a preternatural event threw the seasons out of balance. In a land where summers can last decades and winters a lifetime, trouble is brewing. The cold is returning, and in the frozen wastes to the north of Winterfell, sinister and supernatural forces are massing beyond the kingdomâ€™s protective Wall. At the center of the conflict lie the Starks of Winterfell, a family as harsh and unyielding as the land they were born to. Sweeping from a land of brutal cold to a distant summertime kingdom of epicurean plenty, here is a tale of lords and ladies, soldiers and sorcerers, assassins and bastards, who come together in a time of grim omens. Here an enigmatic band of warriors bear swords of no human metal; a tribe of fierce wildlings carry men off into madness; a cruel young dragon prince barters his sister to win back his throne; and a determined woman undertakes the most treacherous of journeys. Amid plots and counterplots, tragedy and betrayal, victory and terror, the fate of the Starks, their allies, and their enemies hangs perilously in the balance, as each endeavors to win that deadliest of conflicts: the game of thrones. Review "The major fantasy of the decade . . . compulsively readable."â€” Denver Post "We have been invited to a grand feast and pageant: George R.R. Martin has unveiled for us an intensely realized, romantic but realistic world."â€” Chicago Sun-Times "A Best Book of 1996: Martin makes a triumphant return to high fantasy . . . [with] superbly developed characters, accomplished prose, and sheer bloodymindedness."â€” Publishers Weekly, starred review "A splendid saga . . . . Inventive and intricately plotted."â€” BookPage "Magic . . . George R.R.Martin's first fantasy epic [is set] well above the norms of the genre."â€” Locus "Such a splendid tale and such a fantasticorical! I read my eyes out and couldn't stop 'til I finished and it was dawn."â€”Anne McCaffrey About the Author George R.R. Martin sold his first story in 1971 and has been writing professionally since then. He spent ten years in Hollywood as a writer-producer, working on The Twilight Zone, Beauty and the Beast, and various feature films and television pilots that were never made. In the mid '90s he returned to prose, his first love, and began work on his epic fantasy series, A Song of Ice and Fire. He has been in the Seven Kingdoms ever since. Whenever he's allowed to leave, he returns to Santa Fe, New Mexico, where he lives with the lovely Parris, a big white dog called Mischa, and two cats named Augustus and Caligula, who think they run the place. Excerpt. Â© Reprinted by permission. All rights reserved. The morning had dawned clear and cold, with a crispness that hinted at the end of summer. They set forth at daybreak to see a man beheaded, twenty in all, and Bran rode among them, nervous with excitement. This was the first time he had been deemed old enough to go with his lord father and his brothers to see the king's justice done. It was the ninth year of summer, and the seventh of Bran's life. The man had been taken outside a small holdfast in the hills. Robb thought he was a wildling, his sword sworn to Mance Rayder, the King-beyond-the-Wall. It made Bran's skin prickle to think of it. He remembered the hearth tales Old Nan told them. The wildlings were cruel men, she said, slavers and slayers and t