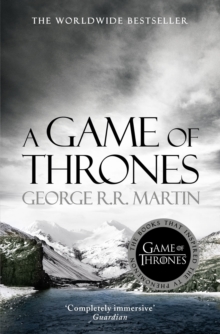 A GAME OF THRONES: BOOK 1 OF A SONG OF ICE AND FIRE

Product Description HBO s hit series A GAME OF THRONES is based on George R R Martin s internationally bestselling series A SONG OF ICE AND FIRE, the greatest fantasy epic of the modern age. A GAME OF THRONES is the first volume in the series. Completely immersive Guardian When you play the game of thrones, you win or you die. There is no middle ground Summers span decades. Winter can last a lifetime. And the struggle for the Iron Throne has begun. From the fertile south, where heat breeds conspiracy, to the vast and savage eastern lands, all the way to the frozen north, kings and queens, knights and renegades, liars, lords and honest men . . . all will play the Game of Thrones. Review A magnificent place, a Starkisean place. There's young Bran, and that's his direwolf. Bran overhead a secret - so thanks to an assaliant, he's now on the verge of dying. His mother Catelyn is by his side, pondering whether he'd live or not; she realizes her responsibility, though, for now Brian's father is gone with the king, it's up to her and her eldest son to protect Winterfell for unexpected dangers lurking ahead. And look! Crows are circling the place. From the scene Jon, Brian's bastard brother, is omitted; he's taken an oath to become a Black Brother. Excellent at fighting, Jon knows the Others are back. The Dead are back. And so the Night's Watch is in hazard too. Hazard from silent, frosty Dead Ones. Arya's stiches are crooked again. She came with the king Robert and her father here, to the tremendous castle of heat where the king resides. Her direwolf is with her. Her sister behaves girlishly; Arya despises her henceforth, as she herself is a manly girl, having the want to do something for the world. And there are things to be done. Wars to be fought. Everyone will take part. For this is the Game of Thrones. --By Amazon Customer on 19 May 2017 This book is really interesting, I can't take my eyes off it.It is written in simple language and the plot is easy to understand.I like the fact that all the important characters, their information has been clearly cited at the end of the book, in the appendix.I hope to read the next book of this series soon. --By Amazon Customer on 16 May 2017 About the Author George R.R. Martin is the author of fourteen novels, including five volumes of A SONG OF ICE AND FIRE, several collections of short stories and numerous screen plays for television drama and feature films. He lives in Santa Fe, New Mexico.