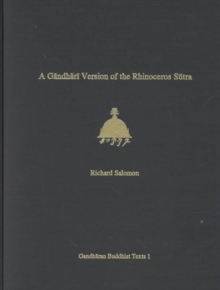 Prominent in several Buddhist traditions, the Rhinoceros Sutra espouses the virtues of solitude, explaining the dangers of attachments, prescribing a solitary spiritual life, and discussing the nature of friends and friendship. British Library Fragment 5B is the remnant of a scroll that originally contained a complete text of the Rhinoceros Sutra. A Gandhari Version of the Rhinoceros Sutra examines in detail the literary and textual background of the sutra, describes the condition of the scroll and its reconstruction, analyzes the text, comparing it with other extant versions, and presents a literal English translation.

Although the original provenance of the British Libraryâ€™s Kharosthi scrolls is uncertain, there are strong indications that they came from Hadda in the Jalalabad Plain of eastern Afghanistan, just west of the Khyber Pass. The scrolls were most likely written during the reign of the Saka rulers, in the early first century A.D., making them in all probability the oldest Buddhist texts ever found, as well as the earliest surviving manuscripts in any Indic language. The discovery of the British Library scrolls has brought to light a previously unknown realm of Buddhist literature and scholarship, and revealed that Gandhari was one of the major literary languages of Indian Buddhism.