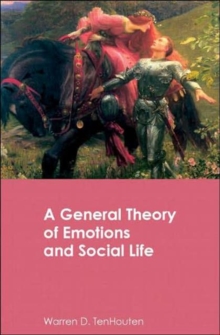 Founded upon the psychoevolutionary theories of Darwin, Plutchik and Izard, a general socioevolutionary theory of the emotions - affect-spectrum theory - classifies a wide spectrum of the emotions and analyzes them on the sociological, psychological and neurobiological levels. This neurocognitive sociology of the emotions supersedes the major theoretical perspectives developed in the sociology of emotions by showing primary emotions to be adaptive reactions to fundamental problems of life which have evolved into elementary social relationships and which can predict occurrences of the entire spectrum of primary, complex secondary, and tertiary emotions. Written by leading social theorist Warren D. TenHouten, this book presents an encyclopaedic classification of the emotions, describingÂ forty-six emotions in detail, and presenting a general multilevel theory of emotions and social life. The scope of coverage of this key work is highly topical and comprehensive, and includes the development of emotions in childhood, symbolic elaboration of complex emotions, emotions management, violence, and cultural and gender differences. While primary emotions have clearly defined valences, this theory shows that complex emotions obey no algebraic law and that all emotions have both creative and destructive potentialities.