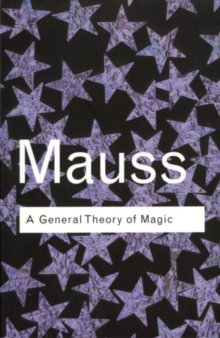 Product Description First written by Marcel Mauss and Henri Humbert in 1902, A General Theory of Magic gained a wide new readership when republished by Mauss in 1950. As a study of magic in 'primitive' societies and its survival today in our thoughts and social actions, it represents what Claude LÃ©vi-Strauss called, in an introduction to that edition, the astonishing modernity of the mind of one of the century's greatest thinkers. The book offers a fascinating snapshot of magic throughout various cultures as well as deep sociological and religious insights still very much relevant today. At a period when art, magic and science appear to be crossing paths once again, A General Theory of Magic presents itself as a classic for our times. Review 'It is enough to recall that Mauss' influence is not limited to ethnographers, none of whom could claim to have escaped it, but extends also to linguists, psychologists, historians or religion and orientalists.' - Claude LÃ©vi-Strauss About the Author Marcel Mauss (1872 - 1950) French anthropologist and sociologist, author of The Gift, and, with Emile Durkheim, Primitive Classification.