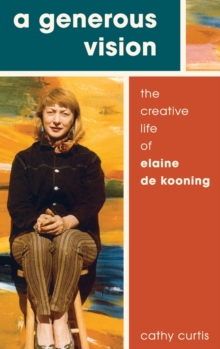 Product Description The first biography of Elaine de Kooning, A Generous Vision portrays a woman whose intelligence, droll sense of humor, and generosity of spirit endeared her to friends and gave her a starring role in the close-knit world of New York artists. Her zest for adventure and freewheeling spending were as legendary as her ever-present cigarette. Flamboyant and witty in person, she was an incisive art writer who expressed maverick opinions in a deceptively casual style. As a painter, she melded Abstract Expressionism with a lifelong interest in bodily movement to capture subjects as diverse as President John F. Kennedy, basketball players, and bullfights. In her romantic life, she went her own way, always keen for male attention. But she credited her husband, Willem de Kooning, as her greatest influence; rather than being overshadowed by his fame, she worked "in his light." Nearly two decades after their separation, after finally embracing sobriety herself, she returned to his side to rescue him from severe alcoholism. Based on painstaking research and dozens of interviews, A Generous Vision brings to life a leading figure of twentieth-century art who lived a full and fascinating life on her own terms. Review "A fascinating book both for its story of the life of a vibrant and talented woman, and its picture of the New York art scene of the 1940s and 1950s." -- Jim Burns, The Penniless Press Online "Cathy Curtis brings the bold, flamboyant, chain-smoking, boozy, sexually captivating de Kooning out of the shadows of abstract expressionism and into the spotlight as an important American painter, critic, and cultural force." -- Linda Leavell, author of Holding On Upside Down: The Life and Work of Marianne Moore "As lively, deft, and insightful as its subject, Cathy Curtis's biography will leave you feeling that you have done the town with Elaine de Kooning, painter, writer, and queen bee of mid-20th century American art."-- Patricia Albers, author of Joan Mitchell, Lady Painter: A Life "Elaine de Kooning was one of the most important figures in the Abstract Expressionist movement, a fact that has been largely ignored historically. Cathy Curtis's A Generous Vision helps introduce this remarkable painter and writer to those who have never had the pleasure of encountering her, and reveals Elaine in greater depth to those who may have thought they knew her."-- Mary Gabriel, National Book Award and Pulitzer Prize finalist, and author of Ninth Street Women: Lee Krasner, Elaine de Kooning, Grace Hartigan, Joan Mitchell, and Helen Frankenthaler: Five Painters and the Movement that Changed Modern Art " A GENEROUS VISION: The Creative Life of Elaine de Kooning (Oxford, October 2017) paints the life of Elaine de Kooning, a prime mover and vivacious social catalyst in the New York art scene of the mid-twentieth-century. Cathy Curtis speaks of Elaine as an incisive writer and diverse painters. Elaine was a celebrated portrait painter whose sitters involved diverse muses in her circle, including (most famously) John F. Kennedy. Elaine's fascination with people and animals in motion led her to paint moments such as bull fighting, basketball, Paleolithic cave paintings, and a multi- figure sculpture in the Jardin du Luxembourg in Paris." -- Los Angeles Review of Books "Meticulous and captivating biographer Curtis continues her quest to fully illuminate the lives and work of underappreciated women artists, following her portrait of painter Grace Hartigan in Restless Ambition (2015) with this vivid and clarifying chronicle of Elaine de Kooning. Curtis chronicles Elaine's diverse accomplishments and channels her radiant spirit and vibrant genius to indelible effect." -- Booklist "Biographies like Curtis's offer a corrective to art history and the art market, which too often focus on mythical art stars and singular 'geniuses.' Friends, lovers and associates can contribute equally to making, explaining and preserving arti