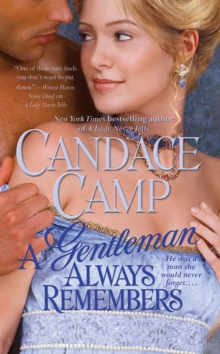 Product Description New York Times bestselling author Candace Campâ€™s delectable Willowmere series continues with the story of the accomplished and pretty widow who takes on the American Bascombe sisters for their London debutâ€”only to discover that, when it comes to love, she is the one who is unprepared. Married young to a charming but improvident army officer, Eve Hawthorne was widowed with little left except for a few extravagant trifles. Desperate to avoid her domineering stepmother, she accepts employment as chaperone to the Earl of Stewkesburyâ€™s American cousins. Who better than a levelheaded widow to remind these young girls that they no longer live on a frontier? But when she flirts with a handsome stranger who turns out to be the earlâ€™s brother Fitz, Eve worries sheâ€™s given the wrong impression. Trying to prove herself responsibleâ€”with Fitz challenging her at every turnâ€”is hard enough, but a blackmailer with an interest in Eveâ€™s prior marriage proves far more troubling. With the earl away, Eve can turn only to Fitz for help. But dare she confide in him, when getting too close to this confirmed bachelor might risk her heart to his alluring ways? Review "Regency romance veteran Camp [...] launches the Willowmere series with this steamy romp. [...] Extended foreplay and explosive climaxes will entertain modern readers" - Publishers Weekly on A Lady Never Tells "Four unconventional American sisters and three aristocratic bachelor brothers set the stage for the first novel in Camp's Willowmere trilogy. With a bit of mayhem, humor, misunderstandings and enough sensuality to please any reader, this consummate storyteller writes a well-crafted and enchanting tale. " - Romantic Times (4.5 stars) on A Lady Never Tells â€œA storyteller who touches the heart of her readers time and again.â€ â€”Romantic Times "Like Campâ€™s other books, this one is beautifully crafted. The characters are so real you feel as though you know them, and the feisty matchmaker and the stubborn duke make a memorable couple." -- Booklist on The Courtship Dance About the Author Candace Camp is a New York Times and USA TODAY bestselling author of more than sixty novels of contemporary and historical romance, including the bestselling Regency romances Enraptured, Treasured, and The Marrying Season. She grew up in Texas in a newspaper family, which explains her love of writing, but she earned a law degree and practiced law before making the decision to write full time. She has received several writing awards, including the RT Book Reviews Career Achievement Award. Visit her at Candace-Camp.com. Excerpt. Â© Reprinted by permission. All rights reserved. A Gentleman Always Remembers 1 APRIL 1807 I t was raining. It had been doing so, Jack thought in disgust, ever since he set foot in this benighted land. Sometimes the water fell in slanted sheets, lashing him like bits of iron; other times, it subsided into a steady, miserable drizzle. But even when the rain stopped briefly, mist still hung over everything, as if the very air were so laden with moisture it could not hold it. A cold drop of water slid between cloth and skin, trickling down his back, and Jack turned up the collar of his greatcoat as he gazed out across the bleak landscape. The roadâ€”if this rutted, narrow path could be termed thatâ€” cut across thick mats of heather and disappeared into the distance. There were few trees between him and the gray curtain of mist, only the brown and green land and a few scrubby bushes. Off to his right, a trench had been dug into the ground, exposing a straight wall of black earth. Rocks of all sizes dotted the lumpy, irregular ground, adding to the image of desolation. What had possessed him to come to Scotland? He had asked himself that question last night as heâ€™d lain on the thin straw mattress in the grim little inn in Kinclannochâ€”indeed heâ€™d asked it almost nightly for the past week, and had still not come up with a satisfactory answer. There was no