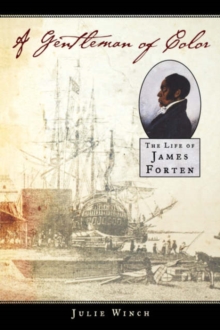 A GENTLEMAN OF COLOR: THE LIFE OF JAMES FORTEN

Product Description Winch has written the first full-length biography of James Forten, a hero of African American history and one of the most remarkable men in 19th-century America. Born into a free black family in 1766, Forten served in the Revolutionary War as a teenager. By 1810 he had earned the distinction of being the leading sailmaker in Philadelphia. Soon after Forten emerged as a leader in Philadelphia's black community and was active in a wide range of reform activities. Especially prominent in national and international antislavery movements, he served as vice-president of the American Anti-Slavery Society and became close friends with William Lloyd Garrison to whom he lent money to start up the Liberator. His family were all active abolitionists and a granddaughter, Charlotte Forten, published a famous diary of her experiences teaching ex-slaves in South Carolina's Sea Islands during the Civil War. This is the first serious biography of Forten, who stands beside Harriet Tubman, Frederick Douglass, Booker T. Washington, and Martin Luther King, Jr., in the pantheon of African Americans who fundamentally shaped American history. Review "Winch's magnificent biography...sets the record straight, restoring Forten to the position he achieved for himself in life: a "gentleman of color" and an American patriot in the front rank of the fight for freedom."-- Philadelphia Inquirer "Rediscovering the life of the once-prominent Forten, largely unknown today, Winch has achieved something quite profound and affecting...Indefatigable research and lucid prose combine to produce a book whose importance cannot be overstated."-- Kirkus Review, starred "Winch has done a masterful job of researching and piecing together Forten's life...This new critical biography not only restores him to his rightful place in American history, but also presents readers with an invigorating and challenging new portrait of pre- and post-Revolutionary race relations and identities...[Winch's] scholarship is both outstanding and vital."-- Publisher's Weekly "Winch inventively used historical context to find her subject's place in 19th-century Philadelphia and goes deep inside Forten's social and intellectual world to explain his quest for respect as a citizen and a man...This first biography of Forten does much to reveal a complexity and range of experience among 19-century blacks."-- Library Journal "This book put me in the presence of Mr. James Forten, an African American, who in the time of slavery was, indeed, a gentleman. The freedom he enjoyed was the freedom he himself created. It was a great pleasure to have spent some time in his company."--Ossie Davis "Thoroughly researched and well-written...[Winch] has made a valiant effort to mine the extant archival materials. Thanks to her creative and tireless detective work, many facets of Forten's life and times are illuminated...[A] fine study. It will stand as the definitive biography of Forten and as one of the premier works on the antebellum African-American experience."-- American Historical Review "At long last we have a deeply researched, well-written biography of James Forten, a black veteran of the American Revolution who, in Horatio Alger style, became a wealthy sailmaker, an employer in Philadelphia of many whites as well as blacks, and one of the first black abolitionists. As a result of Julie Winch's exhaustive research, she must know almost as much about sailmaking and black Philadelphia as James Forten did."--David Brion Davis, Director of the Gilder Lehrman Center for the Study of Slavery, Resistance, and Abolition, Yale University "Julie Winch has written the best biography of an antebellum African American I have read in many years. Exhaustively researched and stunningly argued, her biography of Philadelphia's James Forten belongs on the shelf of every American historian. Our understanding of race relations in one of the centers of African American life is immeasurably adva